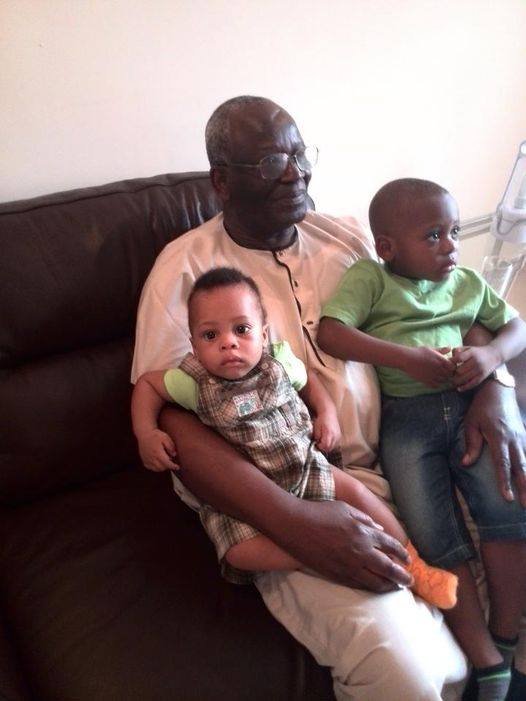 Share FacebookTwitterWhatsAppEmailTelegram
The other day, some social media users expressed anxiety over the on-camera statements made at the corridor of Aso Rock Presidential Villa by the embattled former governor of Edo state Mr. Adams Oshiomhole who purportedly wanted some political enemies to be arrested.
Oshiomhole was speaking with the President’s chief of Staff- Ibrahim Agboola Gambari, a man I happen to know at least as far as that is safe to say. But one should be certain that Gambari is likely to advise his principal more on the side of equity than partisanship. He is a family man and used to demonstrate this in those days with the way he played with some of my children!
Therefore, I am relaying here also for this purpose, some of the lines already published in the media about Gambari’s substance (pardon my not just posting the link instead of opting to paste the entire body of the article), thus:
“This is not one of those window-dressing pieces that many are used to in this part of the world. It is my humble attempt to call forth some tucked in facets of the persona of the recently appointed Chief of Staff to the President.
It is well known that Professor Ibrahim Agboola Gambari brings on board an intimidating resume that doesn’t need any more unveiling. He not only comes across as a well-trained diplomat but also a grand old technocrat. He is courteous and respectful without the usual airs that you find with men of his ilk.
Over the years (and more intensely between the years 2009-2016), I was a steady recipient of his publicly presented papers, besides my scholarly, intellectual, and political discussions with him both here in Nigeria and elsewhere especially in places such as New York and Addis Ababa and of course, Abuja.
This had been sparked when I learned that he was also a proponent of concentricism as a foreign policy tool. That’s a discussion for another day…I thought for instance, that he demonstrated remarkable courage when he flayed the decision of former President Umaru Musa Yar’Adua to stay away from the 64th session of the United Nations General Assembly (UNGA) in October 2009, describing it as a diplomatic blunder, something too costly for Nigeria which at the time was bidding for a seat at the UN Security Council.
Gambari who was at the New York headquarters of the global body as undersecretary-General blamed the decision on improper advice by Yar’Adua’s aides.
Today, he is now one such aide and a very senior one at that! As an illustrious patriot, his had been a leading voice on the high need for a “national rebuilding”, “national way forward”, “national reformation” or “national reconciliation” (the type desirable in Nigeria) Poring over professionalism in national development, he had at different times decried the lack of visionary leadership, gamesmanship and statesmanship in Nigeria, following this up by continuously drawing attention to the nexus between education, development, unity and democratic transformation of Nigeria.
Related Posts

Apr 30, 2022
In one such instance where he presented a paper to a professional group, he postulated among others: “Professionalism as a concept speaks first and foremost to excellence. Built into excellence are merit and standards that underpin quality at its best. A true professional is not only a person of great technical competence and managerial ability, but even (being) political savvy-but also a standard-bearer of civic values and integrity”
In the same vein, at many other fora, Gambari bemoaned what he called “narrow ethno-regional calculations that had become so integral to national territorial administration and economic governance” which he lamented had now “flung the gates open for mediocrity to triumph in the national life, in the process”.
His maturity in handling sensitive matters is another sterling quality. This was quite palpable when for instance he received in October 2017, the self-assessment report in his capacity as Chair of the African Union (AU) Verification Team-being a panel of eminent persons raised to ascertain the level of readiness of the ECOWAS Standby Force.
Although Covid-19 is the rage of the moment, Prof Gambari had by March 2016, come to certain conclusions on the way Africa should be handling China affairs. At the inaugural conference organised by Yale University, through its MacMillan Center for International and Area Studies, in collaboration with Leading business schools in China and on the African continent, Gambari as chairman of Savannah Centre for Diplomacy, Democracy and Development, sued for greater awareness of “cultural clashes” in the course of forging a reinvigorated Sino-Africa partnership, with the impression being created that local sensitivities are being ignored and that African partners are not viewed as true equals.
Professor Gambari once chaired the Niger Delta Peace Committee. When he was resigning from that Committee in July 2008, he wrote to President UmaruYar’ Adua at the time: “My appointment has attracted what appears to be a well-orchestrated and relentless opposition from some quarters, institutions, groups and individuals.”
Today, even with the smear campaign, he wouldn’t be needing to write such a memo. He has come to full cycle and should just be calling Aso Rock shots as a backroom boss. It may well be that he wants to lean close to President Buhari and tell him certain home truths while serving him.
At 75, he has nothing to lose if he does that. His experience and exposure presuppose that he can easily reach out. This, being a plus for the presidency as he takes the reins of what may be his public service twilight gift to the fatherland. Now, the misgivings hovering around the circus of columnists and critics all the more rightly or wrongly, shape the public opinion of him.
But it is up to Gambari to conduct the brief of his business with his principal more quietly than hitherto, with the expected gravitas and sensitivity, such that those of us who knew him to a certain degree could say: Ah!
Yes, we told you, that his artistry did not just come about because he is from Ilorin and dark-skinned with a slightly marked cheek, or an unrepentant Mohammedan or that he could speak softly over hard matters, and all of that, but because truly, the deeper values of his resume’s condiments, stick fittingly to him”
So let anyone not drag Prof Gambari into Edo politics. Edo people must reap what they have sown in the past and redeem themselves today also by their “choice(s)”, actions as well as inactions, and not just through the election at hand but in many more ways. They must choose to move forward or can also opt to get entangled in the past.
32
Share FacebookTwitterWhatsAppEmailTelegram

Edo will be better under Ize-Iyamu