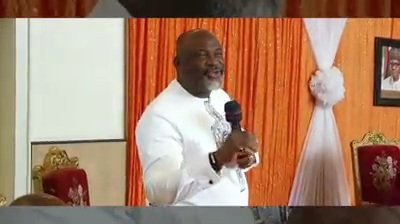 Factional chapter of the Rivers All Progressives Congress loyal to the Minister of Transportation, Rotimi Amaechi has reacted to the defection to the Peoples Democratic Party (PDP) of Dr. Chidi Llyod, describing it as “good riddance to bad rubbish.”

A statement by Ogbonna Nwuke, Acting Publicity Secretary of the APC faction, explained that the action of Llyod, a former leader of the Rivers State House of Assembly, did not come to the party as a surprise.

Lloyd was on Monday received by the leadership of the PDP and the state Governor Nyesom Wike after he apologized for his role in a brawl at house plenary during which he (Llyod) attacked another member, Michael Chinda and inflicted serious injuries on him with the mace.

Nwuke, in the statement, explained that “For years, our supporters have been watching the dance steps of the former member of the Rivers State House of Assembly. It is regrettable that the Akpabu born politician whose activities have been less than desirable has taken a decision to stray from light in order to embrace the darkness.

“We have equally listened to his comments and we are amazed that his hunt for the ‘feeding bottle’ that Wike controls could drive him to such a lowly height.”

He said that for the former lawmaker who willingly apologized for decisions and actions that he took without compulsion from any quarter, has shown his true colors raised serious questions about his credibility and integrity.

Nwuke stated: “We state categorically that the exit of Hon Lloyd would have no effect on the fortunes of the APC. On the contrary, APC members in Emohua Local Government Area are jubilating over his exit. All politics, they say, is local, and these party men and women who are in a happy mood right now know who is who.

“The APC in Rivers State is waxing stronger. Hon Ephraim Nwuzi, the Deputy Chairman of the House of Representatives Committee on the Diaspora who is currently representing Etche/Omuma Federal Constituency has dumped the PDP for the APC.

“At the grassroots, thousands of PDP members drawn from units, wards, and local government areas have quietly joined the APC. Many more leaders of the PDP tired of groping in darkness are moving in the direction of the APC.

“These are men and women who have decided to dump Governor Nyesom Wike and the PDP. These people are tired of the financial recklessness displayed by the Wike administration and tired of his penchant for abusing power.

“They are tired of the dictatorship that has taken root in Rivers State; tired of the impulsive decisions which do not promote good governance, and stressed beyond a reasonable doubt by the ignoble contempt with which the Wike administration views the people”.

“We can understand the frustration that the Wike administration is facing at this time. Because opinion within the PDP is unfavorable towards Wike inside the PDP, Wike has resorted to the antic of procuring “belliticians” from outside his own party to strengthen his dwindling power base.

“We will not be surprised to hear that these discredited persons who no longer enjoy the confidence of APC members in their wards and LGAs would be described as intimate friends of Rt. Hon. Rotimi Amaechi.

“We know that Wike and his associates would like to create some relevance around some of the bad apples that they are able to attract by describing them as men who live in Amaechi’s bedroom. Some of these people who claim to be friends of our leader may have been close yesterday but not certainly today. They have fallen by the wayside as a result of their undying greed for power and filthy lucre.”

Your ambition not worth blood of Edo People – Obahiagbon tells Obaseki