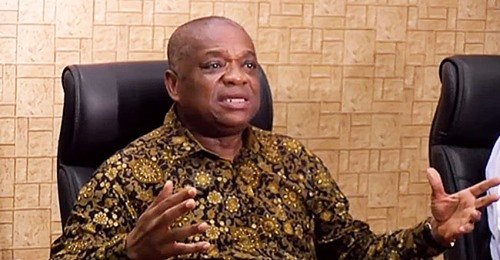 Senator Orji Kalu, the Senate chief whip, on Monday, August 1, declared that he would gladly serve as Nigeria’s president if the electorates gave him the opportunity. The senator said this in Minna during a private visit to Gen. Ibrahim Badamasi Babangida (Rtd) and Gen. Abdulsalami Abubakar (rtd).

“I am still in the Senate, and I will seek for re-election into the Senate but if our people want me to serve as President I will not hesitate,” he said.

Going further, Kalu said that there was no zoning in the APC constitution. He consequently pointed out that any person in the party can contest for the position of the president. “Zoning is not a constitutional matter in APC, any person can contest any post in APC,” he said. Kalu who was the governor of Abia from May 1999 to May 2007 also expressed optimism that the National Assembly would continue to collaborate with the executive in tackling the security challenges in the country. “We will address the issue of sabotage in the Nigeria security system,” he said.

Kalu has stated his readiness to become Nigeria’s president if given the opportunity Source: UGC Meanwhile, Legit.ng had reported that Frank Kokori, a chieftain of APC, alleged that the weakness of ex-president Goodluck Jonathan killed the Igbo aspiration for the presidency. Kokori who is a member of the APC Board of Trustee (BOT) made the statement in an interview with the Sun newspapers.

Legit.ng had also reported that Chief Olabode George has warned that any attempt to dump power rotation in the country may jeopardize or scuttle the nation’s democracy.

George, a former deputy national chairman of the Peoples Democratic Party (PDP), made the assertion in an interview with a newspaper. According to him, zoning is the pillar that has been helping to hold Nigeria together, adding that it cannot just be abandoned as the country prepares for another round of elections in 2023. 2023 election: Why a northerner should be President again.