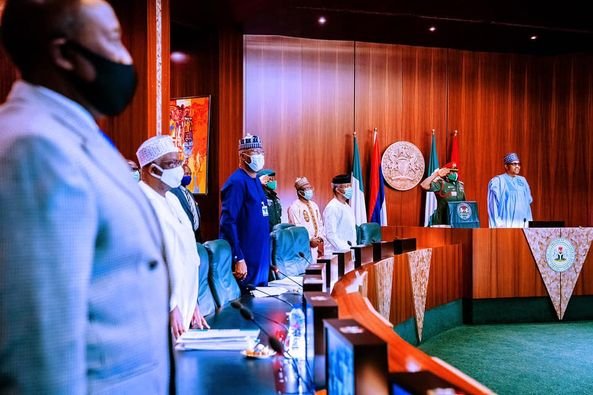 The President, Major General Muhammadu Buhari (retd.), on Thursday, boasted that his regime has recorded what he called “notable achievements” in five years.

Specifically, on agriculture, he said the sector has continued to grow despite the impact of COVID-19 because of his regime’s targeted policies.

According to a statement by his Special Adviser on Media and Publicity, Femi Adesina, the President spoke at a meeting of the National Food Security Council held at the Presidential Villa, Abuja.

The statement was titled “Despite COVID-19, we’ve been able to avert food crisis, says President Buhari.”

Adesina quoted the President as saying that the COVID-19 pandemic exposed the level of preparedness of nations to shocks of food security.

According to him, Buhari explained that the Federal Government’s wisdom in promoting self-sufficiency over the years helped significantly in averting a food crisis.

He said there was a need for more efforts to increase food production and self-sufficiency, assuring that the Federal Government will continue to promote policies that favor investments in the agricultural sector.

The President, “The coronavirus pandemic has illustrated more than any event in recent history how countries must strive harder to protect food systems.

“It has also exposed the limits of dependency on other countries.

“In the last five years, we have recorded notable achievements. Despite the decline in GDP by 6.1 percent in Q2 of 2020 as a direct result of coronavirus, the agricultural sector continued to grow because of government targeted policies.’’

Adesina also quoted the President as commending Nigerian farmers for contributing to the stability in food security.

He said the favorable rainy seasons should serve as encouragement for many to take up farming as a vocation.

“I am pleased to note that most Nigerians are taking advantage of the opportunities in the agriculture and agri-business sector.

“I want to assure you that this government will continue to support these initiatives and many more to come,” the President said.

Buhari also said efforts would be channeled to innovative ways of farming that will guarantee maximum output.

“To protect agricultural investments and boost confidence to our farmers we have deployed thousands of agro-rangers and integrated rural communities to the formal economy by extending access to credit and inputs to rural farmers and building feeder roads.

“We have invested in building our strategic grain reserves in recent years which we recently released significant quantities to cushion the adverse impact of the COVID-19 pandemic to vulnerable households and industries,’’ he added.

Buhari sympathized with farmers and families that lost loved ones to recent floods in the country, assuring them hat the government will support those that were affected.