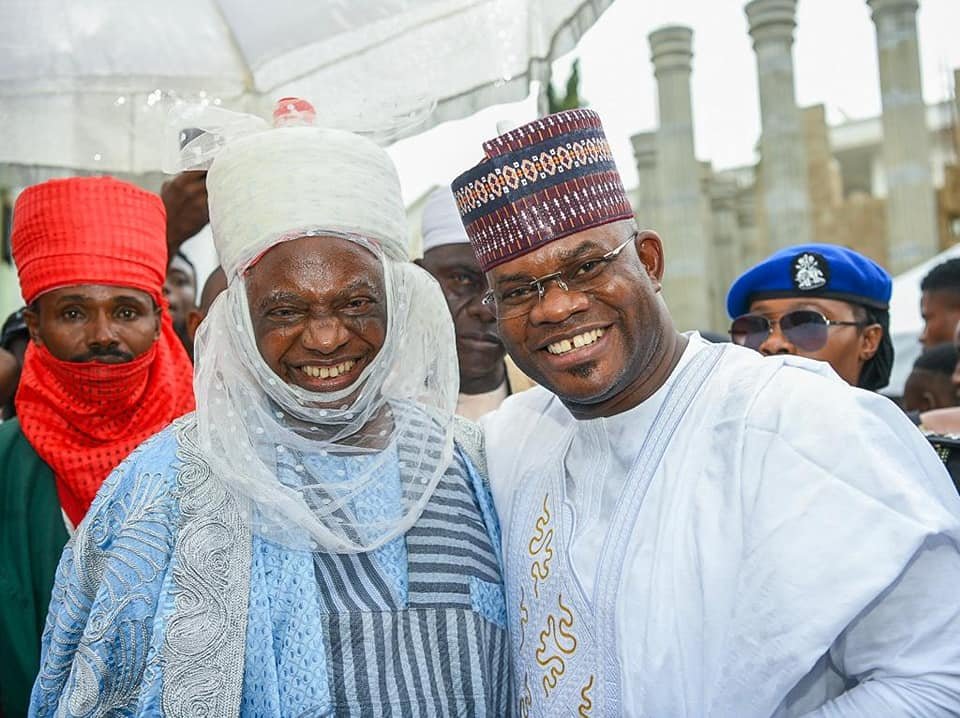 Share FacebookTwitterWhatsAppEmailTelegram
Kogi State Governor, Yahaya Bello joined other muslim faithfuls to attend the Friday Jumat prayers at the Okene Central Mosque, his country home where special prayer of thanksgiving were offered in respect of his recent victory at the Supreme Court.
The governor was received by a large crowd of jubilant supporters who could not hide their excitement as many were seen cheering and dancing to welcome the victorious Gov. Bello.
The governor after the prayers paid homage at the palace of the Ohinoyi of Ebiraland, HRM Dr. Ado Ibrahim where he affirmed that the visit was historically significant as it points back to his initial visit to the royal father in 2015 after the All Progressive Congress Primary election.
The governor used the occasion to commiserate with the paramount ruler over the demise of the late Attah of Igala, Dr. Michael Ameh Oboni II, stating that the late Igala ruler was a staunch supporter of his government as he promoted and preached unity amongst the citizens.
He asserted that the late Attah’s legacies would not be forgotten as his government remained resolute in ensuring that peaceful co-existence and integration remains the fulcrum of the ‘New Direction Government’.
The governor also paid glowing tribute to the late Prince Audu Abubakar whose demise led to his emergence as the governor, noting that his administration’s drive for a united state was one of the late political icon’s aspiration.
Related Posts

Dec 2, 2022
Governor Bello lauded the Ohinoyi whom he regarded as a father for his continued supports for his administration, stating that history has been made during his own time as the Ohinoyi of Ebiraland.
He affirmed that his victory was for all the citizens of the Confluence State irrespective of their ethnic groups, religion or class.
Governor Bello assured the people of the state that his second term in office will witness more infrastructural development across the state.
Bello reiterated that his administration would continue to accord priority to the issues of youth development and well-being in the state.
He therefore urged the people of the Confluence State to continue to support his administration to enable him bring about the needed transformation to the state.
In his own remarks, the Ohinoyi of Ebiraland, Dr. Ado Ibrahim expressed joy over the victory of Governor Bello at the Supreme Court, noting that it was the will of the Almighty.
He charged the governor to use his God given mandate to impact lives positively while he prayed for God to give him the wisdom to steer the affairs of the state towards a prosperous end.
26
Share FacebookTwitterWhatsAppEmailTelegram

PRESS BRIEFING  ADDRESSED BY THE  PUBLISHER APC NewsOnline DR.  TOM OHIKERE ON THE 4TH OF SEPTEMBER, 2020