Protests in Ibadan over alleged secession agenda of Yoruba nation 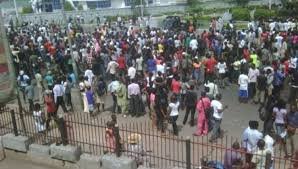 Two leading Yoruba socio-cultural groups are currently at loggerheads over the alleged secession agenda being championed by one of the groups for the South West of Nigeria to break away from Nigeria and become an independent nation.

The YWC addressed a press conference at its headquarters, Bodija, Ibadan, the Oyo State capital, on Tuesday and re-established a vote of absolute confidence in the leadership of Akintoye. Also, the YAF, staged a peaceful protest march to the Oyo State Governor’s Office, Agodi, Ibadan on the same Tuesday against the alleged secession agenda of YWC.

The YAF also presented a protest letter to the Governor Seyi Makinde, through his Executive Assistant on Security, Mr. Sunday Odukoya, who said: “We have received your letter. We shall deliver your message to the governor. Now that you have expressed your reservations, we assure you that we shall address the matter.”

The protesters carried placards with inscriptions, including:  ‘What we need is development, not secession.’ Together we stand, divided we fall.’ ‘Together we stand and love one another.’ ‘Believe in one Nigeria.’ ‘In one Nigeria we stand.’ ‘We are for unity, don’t beat the drum of war.’

But addressing journalists on behalf of YWC, Dr. Tunde Hamzat, dismissed the news making the round that Akintoye was no longer the leader of the Yoruba nation, saying: “The Yoruba World Congress is one and indivisible under the leadership of Emeritus Prof Banji Akintoye. There is no crisis within the YWC. We are not in contention with anyone or group. This is a family issue that is being resolved within the clan.

“We remain unequivocally committed to the ideals of the Yoruba World Congress (YWC) as eloquently expressed by Prof. Banji Akintoye, which are to liberate the Yoruba race from the oppression and persecution which Nigeria represents, to establish a better, more promising future for our teeming youths and to ensure the peaceful achievement of the self-determination goals of the Yoruba nation.

“This is a gathering of all the groups which elected Prof. Banji Akintoye as Yoruba leader a year ago. They are the various groups that came together to form the Yoruba World Congress. These groups are gathered here in Ibadan, one year after that momentous event, to re-establish a vote of absolute confidence in the leadership of Prof. Banji Akintoye.”

Hamzat, who said the brains behind YAF are four members of YWC that were suspended based on certain issues, also noted that Akintoye emerged the leader of the Yoruba nation on August 22, 2019, and within one year, more than 100 Yoruba, both in Nigeria and in the diaspora, have been admitted into the YWC, saying “our admission into the Unrepresented Nations and Peoples Organisation (UNPO) within a year of our existence, is novel and commendable. The Oodua Nation project is on course. We appreciate the efforts of Prof. Banji Akintoye and other leaders in this respect. The protection of the lives and properties of the Yoruba and other ethnic nationalities domiciled in the southwest geo-political zone is of paramount importance to YWC leadership.

“We commend the courage exhibited by our governors in the establishment of Amotekun even in the midst of hostility and intimidation by the powers that be. The Water Bill at the National Assembly represents a background maneuver to bring back RUGA and further appropriate more of the resources of Yorubaland. It, therefore, stands totally rejected by the YWC. In equal effect, the CAMA bill cannot stand because it puts the control of one religious group under another. It represents the ruthless deployment of power by the Muslim North to further continue the Islamisation and Fulanisation of Nigeria.”

However, the protest letter, entitled: ‘Please, Save Yorubaland from Imminent Doom!’ signed by Adeshina Animashaun, addressed to Governor Makinde, read in part: “Your Excellency, a motley of crowd of discontents, zealots have lately increased the tempo of their unpatriotic activities masquerading as championing the cause of the Yoruba people of the South-West. Their activities, at best, qualify for nothing good.

“The Yoruba Appraisal Forum is by this statement giving a notice that we, as responsible Yoruba, will not fold our arms and watch a few disgruntled and self-serving individuals to turn our land into a wartorn zone like Somalia and Sudan. If it ever becomes imperative for Yorubaland to break away from the rest of Nigeria, it should be a collective decision of all Yoruba people within Nigeria and in the Diaspora. The recent activities of the Yoruba World Congress and its cohorts underscore the need for government and security agencies to be more informed about the decisive tendencies of these groups.”