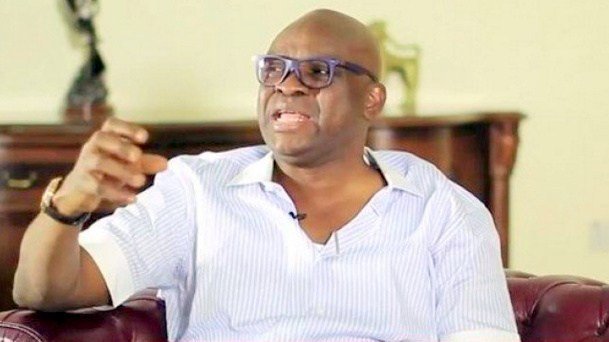 ADO-EKITI – The festering crisis rock­ing the Ekiti State chapter of the Peoples Democrat­ic Party (PDP) might not abate until the intention of former governor Ayo Fayose with the party was known.

This was the position of the faction loyal to Senator Abio­dun Olujimi, who accused the former governor of having underhand dealings with the national leader of ruling All Progressives Congress (APC) Asiwaju Bola Tinubu.

Political actors in the cri­sis, including Diran Odeyemi, Secretary of the Caretaker Committee set up by the Na­tional Working Committee (NWC) to run the affairs of the troubled Ekiti chapter, spoke on a radio program on New Cruse 92.7 FM, Ikere, monitored by Daily Indepen­dent in Ado-Ekiti.

In his submission, the im­mediate past PDP Publicity Secretary in Ekiti, Mr. Jack­son Adebayo, accused Fayose of romancing the APC and working for the interest of Tinubu.

Adebayo, who is a chief­tain of the PDP Reposition­ing Group, which is loyal to Olujimi, maintained that the congress, which produced Mr. Kehinde Odebunmi as chairman as the authentic ones.

But Odeyemi insisted that NWC recognized Mr. Bisi Kolawole, who emerged from the congress supported by Fayose as the valid state party chairman, urging the two factions to come togeth­er, allow peace to reign and concentrate on providing a vibrant opposition.

Describing Kolawole as an “illegal chairman”, Adebayo said the Ekiti PDP would not be run like a private proper­ty, saying the Odebunmi-led executive had resolved not to use the building allegedly belonging to Fayose as party secretariat, alleging that the ex-governor had sold the new secretariat.

Protests in Ibadan over alleged secession agenda of Yoruba nation