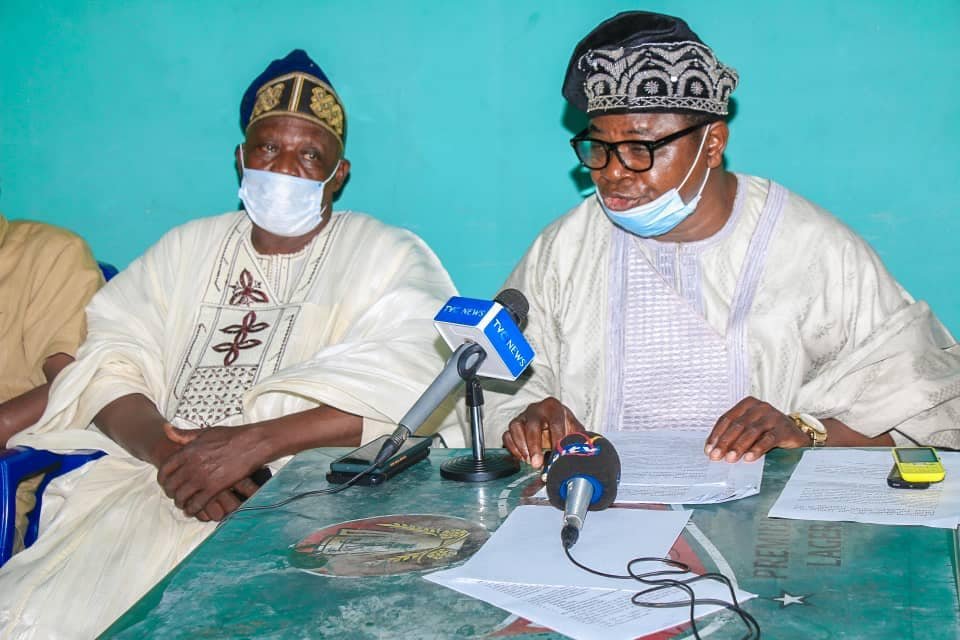 Share FacebookTwitterWhatsAppEmailTelegram
A REJOINDER BY OSUN WEST APC LEADERS TO A POLITICAL SUBMISSION OF “OSUN NETWORK FOR EQUITY AND SOCIAL JUSTICE” PUBLISHED IN THE NATION NEWSPAPER OF THE 18TH AUGUST 2020.
PREAMBLE:
Our attention has been drawn to the unpardonable sinister move by some faceless and unscrupulous elements who are desperately bound to precipitate unhealthy friction in the name of agitation for power shift in Osun West Senatorial District come 2022, we, the under listed notable leaders of the Osun West extraction of the ruling APC in the State who are no doubt behind the agitation for Osun West code-named “West Lokan” ahead of the 2018 Gubernatorial election, a selfless action we never regretted simply because we felt our Senatorial district was totally neglected, the infrastructural deficit was embarrassingly wide, becoming an eyesore then.
To put the records straight, the present administration under H/E Alhaji Gboyega Oyetola has touched the following fundamental areas of development particularly in Osun West Senatorial District details of which are in the public domain under the following subheads: *
Roads Infrastructure,
Health,
Education,
Human Resource Development and Political Attention.
ROADS INFRASTRUCTURE: For the sake of clarity in the face of the World, we shall herein
take some pains to bring to bear catalog of particular roads within Osun West Senatorial District which have received attention including the numerous ones currently receiving urgent attention all of which were formerly in precariously deplorable condition. Such roads are:
1. Ede – Ojo – Ara – Igbon – Ejigbo road;
2. Ede – Awo – Iragberi – Aato – Inisa – Ejigbo road;
3. Ido-Osun township road;
4. Osogbo – Ido-Osun traversing Egbedore Local Government
Area – Iwo – Ibadan
5. Ede township roads: 6. Iwo township roads;
7. Ikire – Apomu – Gbongan- Ile-Ogbo – Ede roads; 8. Other roads under rehabilitation are Ikire – Orile-Owu
9. Ife – Gbongan – Ibadan.
HEALTH SECTOR
It gladdens our hearts to inform the World that H/E Alhaji Gboyega Oyetola has magnanimously attended to, face-lifted, and in some areas built Health facilities especially PHCs across all over 100 electoral wards within the District. Particular of note the Ejigbo General Hospital which has been upgraded and accommodates COVID-19 patients, Also of note is the Governor’s wonderful management of the COVID-19 pandemic which is commended by all and sundry, particularly the manner and approach he exhibited towards the 127 Ejigbo bound Ivory Coast returnees, against the counsel of prominent Sons of Osun who advised him to turn a blind eye to their plights and deny them entry into the town of their birth and origin, his conduct was the hallmark of Statesmanship, we thank him again most profusely.
HUMAN RESOURCE DEVELOPMENT
Worthy of note is his recommendation of our son, Rt. Hon. Rafiu Adejare Bello as a noncareer Ambassador announced recently which is another feat to Osun West Senatorial district.
EDUCATION
The entire West District recognizes the wonderful and mature roles exhibited by Governor Oyetola in the establishment of the Federal College of Education Iwo. We remain grateful.
POLITICAL ATTENTION
Let it be stated expressly that we have eminent and qualified Sons and daughters who can fit into the governorship race, however, our support for the incumbent Governor remains firm, unshaken.
unwavering, solid, and rooted in our loyalty to his leadership prowess as the State helmsman, and this will continue as long as he remains committed to the pact of good governance and emulative motivational acumen of the unwritten cord he struck with the Osun West Senatorial District electorates.
Our roles as age long Progressive disciples include;- continued support for a performing administrator towards implementing the noble ideas enshrined in our party’s manifesto and electioneering promises made to over four million Osun citizens who have reposed great confidence and followership in the APC administration. It is also evident that the opposition parties in Osun have become deserted and jittery over the successes and unparalleled performances of the incumbent Governor, which is a credit to his love for the people and sacred faithfulness to the Oath of Office he had sworn to protect.
We are pleased with his style of leadership, and can only beseech him to remain undaunted and focused to the philosophy and ideals of his developmental programs he believes in reshaping the Osun dreams of our founding fathers on the track of progress and development in self-sufficiency and Independence.
OUR DECLARATION
The continuity mantra he promised Osun people is yielding positive dividends as he has continually, consistently and passionately funded all inherited ongoing projects of his predecessor, with this singular act of his, we, the leaders of Osun APC in the Osun West Senatorial District hereby pass a VOTE OF CONFIDENCE on the Governor, His Excellency, Mr. Gboyega Oyetola for his foresight, exemplary leadership, administrative skills and using this opportunity to completely dissociate ourselves from the submission of Osun Network For Equity and Social Justice published in the Nations newspaper of the 18 days of August 2020.
The sponsored crisis within the Osun APC family, this crooked and demonic practice of theirs, has failed and dead on arrival.
We, therefore, enjoin the unsuspecting public to disregard the purported ideology they claim to represent and the divisive pointers they preach in the agitation for power shift. If they are selfless just like we are, they should have requested just like Oliver Twist for more interventions for our various Communities, Villages, and Towns so that they can transform into developed centers of excellence within the District.
We want to urge the Governor to continue to bridge the Osun West Infrastructural gap deficit as soon as possible, while we assure Mr. Governor of our continued support and loyalty, knowing fully well that the issue of his 2nd term in office is not yet on the political front burner, and for us whenever the trumpet may sound for political activities, it will be about the slogan of “Oyetola Lee’kansi”, so we can oil the machinery of a smooth takeover for our Senatorial district after he might have successfully piloted the affairs of our State for eight unbroken years as his predecessor.
For and on behalf of APC Members, Osun West Senatorial District.
Related Posts