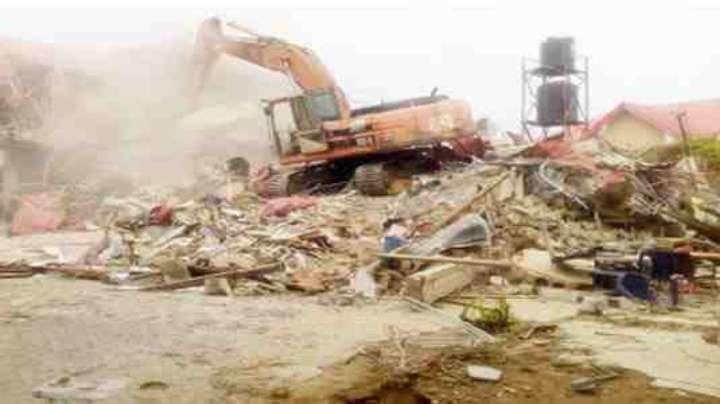 The Federal Capital Territory Administration (FCTA) has commenced the mass demolition of purported illegal houses and structures in the territory.

The exercise did not come without resistance from some members of the Utako community, who challenged personnel of the department of development control.

Some inhabitants of the village in the early hours of yesterday, on sighting bulldozers, constituted themselves into small groups and began hauling stones at the machine and the personnel.

Unable to withstand the resistance, the bulldozers retreated and sped off. The personnel followed suit as the rain of stones persisted and the surge from the hoodlums became unbearable.

While the team ran in search of safety, men of the security personnel made up of the police, Nigeria Security and Civil Defence Corps, and Nigeria Correctional Service shot in the air and fired tear gas to disperse the protesters.

After the initial setback, the machine rode on almost all the shanties, makeshift houses, and all attachments, leaving only houses owned by Abuja’s original inhabitants.

Asked why the selective demolition, the director, Department of Development Control, Muktar Galadima, who led the exercise, explained that houses belonging to Abuja natives were not touched because their compensation was yet to be completed and resettled.

Chairman, Task Team on City Sanitation,  Attah Ikharo, while corroborated the position of the director.

Speaking on behalf of the natives, Danmasani of Utako, Danjuma Daniel stated that the natives were in full support of the exercise because they were carried along.

In a similar way, the Administration has inspected project sites in Guzape, Asokoro, Katampe Extension districts, and National Assembly Quarters, Apo for demolition.

On reasons for the high rate of contraventions of building approvals, Galadima said many developers took advantage of the lockdown period to carry out illegal developments by either building without approvals or building the above-approved number of units as well as an arbitrary change of land use.