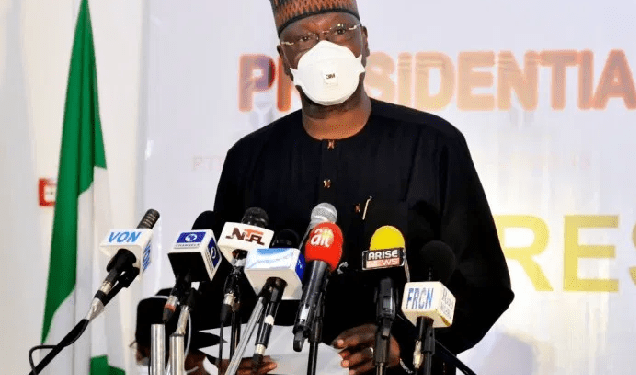 The federal government has observed failure by various ministries, departments, and agencies to work collaboratively as reason for slow pace of service delivery and the high cost of governance in the country.

Secretary to the Government of the Federation (SGF), Mr Boss Mustapha, disclosed this on Tuesday, during the Day-Two session of the First Year Ministerial Performance Review Retreat for Ministers, Permanent Secretaries, and Top Government Functionaries, at the State House Conference Centre.

The SGF, who spoke of his reflections on ministerial performances, also noted that ministers had reported that most of the government’s plans had been negatively impacted by the outbreak of the Novel Coronavirus (COVID-19) Pandemic as the execution of many projects had either slowed down or stalled altogether.

Mustapha further noted that ministers repeatedly highlighted the failure to release funds timely for the execution of projects, which he attributed to low revenue generation.

He, however, assured that the administration would not rest in its efforts to continue to identify the various debilitating factors affecting the zeal of government to deliver on its promises and duties to Nigerians, stating some of the plans to mitigate the identified challenges.

“These challenges, some of which we have identified; such as the need to collaborate at the priority area level and avoiding the debilitating effects of working in silos. This challenge has hampered speed, efficiency, effective delivery, and in several instances has added to and increased the cost of running the Ministries, Departments and Agencies.

“We will have to support the government to work in a more joined-up manner and ensure that interagency collaboration becomes the norm, rather than the exception. It is our collective task to maximize the opportunities, mitigate and minimize the challenges in order that we can make rapid progress going forward.

“The report also identified the challenge occasioned by the primary and secondary impacts of COVID-19 which had an adverse effect on Nations across the globe and Nigeria is no exception. Several projects have either slowed down and in some cases, have stalled altogether as a result of this pandemic. We shall weather this storm and indeed actively seek and exploit the opportunities that it presents.

“The Economic Sustainability Plan which was presented by Mr. Vice President is one of the ways the government has responded towards cushioning the effect of the COVID-19 pandemic.

“Low revenues which have affected the timely release of funds, especially for the implementation of capital projects have been repeatedly mentioned as one of the major constraints to the implementation of MDA’s programs and projects. We will not rest on our oars in seeking other alternative sources to raise funds for projects beyond revenue from the government.

“The issue of inadequate capacity in the Public Service is a critical challenge that must be addressed. It is gratifying to note that the Office of the Head of the Civil Service of the Federation is currently working in this regard.

“We will also collectively explore how to address other related constraints, through interagency collaboration and partnerships in government, as well as explore private sector resourcing in key MDAs where subject matter experts equipped with strategic skillsets to facilitate project delivery are required,” he said.

He, however, noted that the administration would not allow identified challenges to shift its focus from the nine priority areas, adding that steps would be taken promptly to address already identified issues.

“Our commitment going forward is to build on the progress we have made in the past year, reflect on the lessons learned, fix those issues that have proved to be impediments, double our efforts, and ensure that this time next year when we gather again to review progress, we will be reporting more tremendous gains and achievements.

“To achieve this objective, it is planned that the Delivery Unit at the Office of the Secretary to the Government of the Federation (OSGF) will support the Ministers and the respective MDAs towards the actualization of this objective.

“Going forward, we need to formulate more homegrown solutions, which I believe you have actually deliberated upon during the Breakout Sessions yesterday, to see what and how people in other climes are faring and where it suits, adopt and adapt what has worked as the World Bank Chief Economist suggested yesterday,” he said.