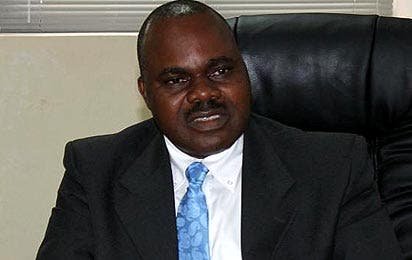 Prof. Angwe at an elaborate event held at Tse- Kucha in Gboko on Saturday formally joined the party with thousands of his followers across the state.

Declaring his intention, Prof. Angwe said he was joining the Party in solidarity with his brother, Distinguished Senator George Akume whom he described as humane, tolerant, and accommodating.

He expressed his willingness to support the APC to become a stronger party, as well as work closely with Senator George Akume and the Buhari led administration.

In his remarks, National Caretaker Chairman, Extraordinary Convention Planning Committee of the APC, Mai Mala Buni, represented by Former President of the Senate, Ken Nnamani said he was overwhelmed with joy following the mammoth crowd he saw.

He acknowledged the leadership qualities of Senator George Akume, describing him as one who is vast in knowledge and has played a vital role in the reelection of President Muhammadu Buhari.

Senator Nnamani said Prof Bem Angwe joining the party at its rebranding stage was vital and significant for the success of the party in Benue.

Minister of Special Duties and Intergovernmental Affairs, Senator George Akume expressed happiness over the decision of the former Human Rights Commission’s boss to join him in the APC.

The APC Leader said the coming into APC of Prof. Angwe was timely, describing him as a worthy son who is focused and knowledgeable, as such, his wealth of experience would bear greatly on the Party in the state and Nigeria at large.

Earlier, the Chairman of the occasion distinguished Senator Jack Tilley Gyado had alluded, that the coming of Angwe was going to restore the unity of the Jemgbagh people politically and expressed satisfaction with the leadership of the APC in the state.

Others who spoke at the event, including the State Chairman of the APC Comrade Abba Yaro, Senator Chief Barnabas Gemade, Member Representing Vandeikya/Konshisha Federal Constituency, Hon. Herman Hembe, Member Gboko/Tarka Constituency, Hon. John Dyegh, former Senatorial candidate of Zone A in the 2019 general elections, Chief Mrs. Mimi Orubibi and Barr. Sam Ode who all applauded the leadership qualities of Senator George Akume and hailed the decision of Prof. Bem Angwe in pitching a tent with the All Progressives Congress in the State and assured him of equal rights and opportunities.

Highlights of the occasion included the handing of APC membership cards and flags to the new entrant by the ward chairmen in the company of the local and state government chairmen of the party.