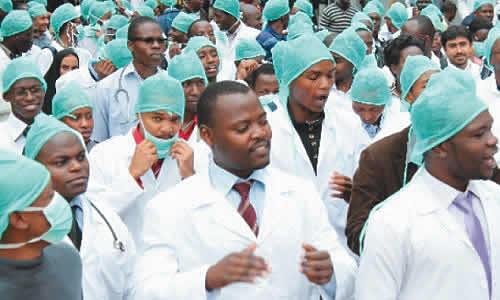 The nationwide strike embarked upon by the National Association of Resident Doctors paralysed activities at major public hospitals across the country on Monday just as the Federal Government pleaded with the doctors to suspend the industrial action.

The government also said it had reconvened the conciliation meeting between NARD and government agencies.

Recall that the association in a statement by its President, Aliyu Sokomba, said it would embark on an indefinite strike from 8 am on Monday.

The strike is to press home demands for the improved package, including payment of COVID-19 allowance, residency training and implementation of the new minimum wage, among others.

At the Olabisi Onabanjo University Teaching Hospital, Sagamu, and the Federal Medical Centre, Idi-Aba, Abeokuta, both in Ogun State, consultant doctors were seen attending to patients.

The Secretary of ARD OOUTH, Dr Tope Osundara, said the branch joined the strike despite the fact it just called off the two-week strike.

Speaking on the situation at FMC, the director, Public Relations, Segun Orisajo said, “All the patients that came today were attended to. We only pray that the strike is not longer than necessary.”

When one of our correspondents visited LUTH, some of the patients at the emergency ward of the hospital complained of not being attended to.

The Chairman Medical Advisory Committee, LUTH, Prof. Wasiu Adeyemo, told one of the correspondents that services in the hospital had not been stopped as a result of the strike.

He said, “The resident doctors are not the only doctors in the hospital, we have our consultants, house officers and other health workers.”

At LASUTH, the Chief Medical Director, Prof. Adetokunbo Fabamwo, said the hospital had a ‘staggered’ arrangement fixed for patients as part of its COVID-19 response to reduce crowd in the hospital.

He said, although other health workers were working, the hospital had a good relationship with the resident doctors in the hospital and they could be called upon in case of emergency.

Activities at government-owned hospitals in Oyo State were at low ebb on Monday.

The resident doctors in the state-owned hospitals were not on duty during our correspondent’s check at Adeoyo State Hospital, Ring Road and the state hospital at Yemetu.

At the University College Hospital, some patients were being discharged just as those in the critical state were treated.

It was gathered that many of them sought referrals to private hospitals within and outside the state.

The President, NARD, Dr Adedayo Williams, said, “The rate of compliance by the resident doctors at the University College Hospital is very total. The reason why you see some of our members on the wards today is just to ensure save discharge of patients.”

Also, the resident doctors in Gombe State on Monday abandoned their duty post.

Our correspondent observed that some patients were, however, attended to by consultants, which caused the delay.

One of the patients, Adamu Suleiman, said, “I spent over five hours to see the doctor, I didn’t know they were on strike, I would have postponed my coming.”

The state President of NARD Dr Nuhu James, said, “We know it will not be easy on the patients because the resident doctors constitute a bulk of the workforce of the hospitals across the country. All our members are involved.”

Activities down in Enugu

In Enugu State, one of our correspondents on Monday reported that activities at both federal and state hospitals in Enugu State were paralysed.

At the state teaching hospital, ESUT-Parklane, only the consultants were attending to patients.

The situation was the same at the Federal Neuropsychiatric Hospital, National Orthopedic Hospital and the University of Nigeria Teaching Hospital, Enugu.

A consultant, Dr Onyekachi Ugwuonye, decried that the strike action had paralyzed activities in the hospital.

Ugwuonye who is the Deputy Vice President, Enugu chapter of Nigeria Medical Association, said, “As it is now only patients on emergency were being attended and patients inwards are being discharged.”

Chairman of NARD FNH, Dr Nkire Joel, told our correspondent that they joined the strike because that was the only thing government listened to.

The scenario was the same in the Jos University Teaching Hospital, Plateau State, as some of the doctors were seen discharging patients.

A statement in Jos on Monday by the President, ARD, Dr Stephen Lukden, reads partly, “The issues at stake today are not peculiar to resident doctors in Nigeria but touch the entire health workforce. The evidence is seen in the solidarity we have across the health workers.”

In the same vein, the NARD in Umuahia, Abia State, on Monday joined its counterparts all over the country in the strike.

The President, NARD, Federal Medical Centre, Umuahia, Dr Onu Felix, also called on the Federal Government to prevail on the state government to pay doctors in the state.

He said, “We have not seen seriousness on the part of the Abia State Government to address the demand of our members in the Abia State University Hospital. I can’t imagine not being paid up to 16 months. It is quite difficult.”

Visits to the state general hospital and the Federal Medical Centre, in Katsina, showed that patients at the two hospitals were being attended to by senior doctors and other health workers.

The acting Medical Director for FMC, Dr Habib Ibrahim, urged the Federal Government to meet the demands of the striking resident doctors.

He said it doctors who were part of the COVID-19 pandemic fight were exempted from the industrial action.

Meanwhile, NARD has set up a strike monitoring committee to ensure 100 per cent compliance in the strike.

The National Publicity Secretary of NARD, Dr Stanley Egbogu, said the action would not be called off until government listens to their demands.

Also, the Federal Government has pleaded with the NARD to suspend its ongoing industrial action.

The government said it had already addressed six out of the eight demands listed by the association.

The Minister for Labour and Employment, Dr Chris Ngige, stated this in his office in Abuja on Monday.

He has, however, reconvened the ongoing conciliation meeting between NARD and the Federal Ministries of Health, and Finance, Budget and National Planning to be held on Wednesday at his office.

Ngige asked NARD to respect the country’s laws and suspend its industrial action, reminding it that “by labour laws and ILO (International Labour Organisation) Conventions, when issues are being conciliated, all parties are enjoined not to employ arm-twisting methods to intimidate or foist a state of helplessness on the other party; in this case, your employers, the Federal Ministry of Health.”

He said with such a high percentage of the association’s demands already addressed, coupled with the existence of a pending case in the National Industrial Court instituted by two civil society groups against NARD, the Attorney-General of the Federation, and the Ministers of Health, and Labour and Employment, the doctors had no reason to embark on industrial action.

According to a statement by the ministry’s spokesman,  Charles Akpan, the minister noted that in spite of the lean resources occasioned by the effect of COVID-19 on oil output, the FG has already spent N20bn on the Special Hazard and Inducement Allowances for medical and health workers for April, May and June 2020, with a few outstanding payments to some health workers for June 2020.

Ngige also stated that the government has expended N9.3bn as premium for group life insurance for medical and health workers as well as for all civil and public servants in Federal organisations that are treasury-funded, to run from March 2020 to March 2021.

Ngige pointed out that the matter between NARD and the University of Port Harcourt Teaching Hospital has been resolved, noting that the resolution of the issue of state governments not addressing the consequential adjustment to the new minimum wage, and low patronage of the residency programme was ongoing.