EDO GUBER: Obaseki to pay for his Political divide 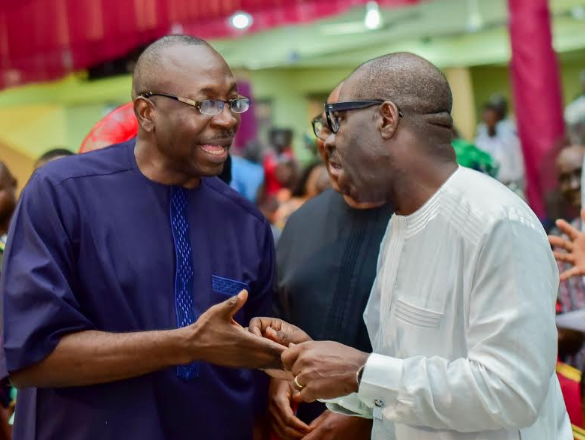 The casual switching of the partisan allegiances of Obaseki to PDP after losing the APC primaries to Ize-Iyamu is a clear act of desperation to retain power at all costs irrespective of the interest and supports of the people and must be checked to curtail the excesses of his incumbent advantage.

The September 19, Edo Governorship election has aroused tension and speculation at fever pitch as the two main gladiators in the Edo State governorship election, Governor Godwin Obaseki of the Peoples Democratic Party (PDP) and his key rival, Pastor Osagie Ize-Iyamu of the All Progressives Congress (APC), ready for an epic showdown on September 19, however certain undercurrents set to determine the final outcome.

In Edo State, today, the absurdity is in having a state governor and deputy governor belonging to the PDP while the 20 inaugurated members of the state assembly are in the APC. The election is, therefore, going to be a tough one. This is due, particularly, to the incumbency factor, which cannot be ignored in any election.

This is critical, given the fact that money and the personal relationship would play a big role than the expected brigandage in some quarters. But be that as it may, several undercurrents will be playing against Obaseki in September 19 election,  for instance, the governor will have to contend with six members-elect from his district he prevented from being inaugurated out of 10. They are those from Uhunmwonde, Oredo East, Oredo West, Ovia North East I, Ovia North East II, and Ovia South-west. Those also deprived in Edo North, where Obaseki’s deputy, Shaibu, hails from, who make up 30 per cent of Edo State voting population, may want to take their pound of flesh. They are the people of Etsako West I, Etsako West II, Etsako Central, Etsako East, Owan East, Owan West and Akoko-Edo II.

Comrade Adams Oshiomhole, the labour leader-turned-politician remains an influential figure in both national and local politics any day. Although, he has his weaknesses and shortcomings, which make him human, the former governor of Edo State used his eight years as governor maximally to spread his tentacles almost everywhere in the state.

As national chairman of APC, he made men and women in the state by influencing appointments in their favour. In doing so, he never discriminated when such appointments were given. How PDP will make an in-road in the entire state and Edo North, in particular, where he comes from, remains to be seen.

“Each passing day reveals gradually evidence that the final outcome may follow some existential extrapolations that Ize-Iyamu of the APC will win and bring victory to the party and the Edo people.”

Edo South holds all the aces, as whoever secures the entire voting strength in the district can as well go to sleep. But it cannot be entirely so this time because the two gladiators are both sons of the soil. So both are going to split the votes of the district.

In Edo North, the ballot, no doubt, would be contested between the incumbent deputy governor, Philip Shaibu, who defected with his boss to the PDP, and the former national chairman of the APC, Adams Oshiomhole. The question is, can Shaibu influence enough votes for the PDP to secure a win? The answer seems of little significance because of whatever influence he wields was also because of the Oshiomhole factor. Ordinarily, Shaibu does not command a lot of foot soldiers, except the usual brigandage invoked to try to influence things by force.

Incidentally, Shaibu has a match in the person of Ganiyu Audu, who is the running mate to Ize-Iyamu. A grassroots politician, who may also ride on the influence of religion, especially, as a Muslim with an appreciably large number of faithful, Audu is definitely not a pushover in the equation. His choice appears to have consciously balanced religion – Christian/Muslim ticket, unlike PDP’s Christian/Christian ticket. Interestingly, this is the first time since 1999 that a Muslim deputy is on the ticket. Many Edo Muslims are likely to see this as a positive for the Muslim community’s long agitation for a voice at the centre of power in Edo State.

Besides, of the eight state constituencies, only two were sworn in, leaving six yet to be inaugurated, which, in the political calculation, is not an encouraging one. Therefore, with a ratio of two (Oshiomhole and Audu) to one (Shaibu), Edo North still does not stand in this contest as a battleground region, but a place where subsisting influence could count largely.

A major influence in Edo North, no matter the misgivings, is Oshiomhole, who is a former governor of the state and former national chairman of APC. Those who think his suspension has reduced his influence, both in his district and the entire Edo, will be making the greatest political mistake of their lives, because hate him or like him, the diminutive ‘Adamant’ Adams had made and is still making people across the three senatorial districts, who may not likely abandon him.

In fact, his suspension and eventual loss of his position as national chairman of the ruling party will likely attract sympathy to his message to the people of the zone to vote out Obaseki. Also very important is the fact that Oshiomhole’s lose of the APC chairmanship has left Edo North with no influential voice at the national level of power. As one observer put it recently, “With Oshiomhole’s ouster, our people have lost their only voice in national politics.” The people are likely going to take note of this and also blame Shuaibu, largely seen as the instigator of the purported suspension that ultimately led to Oshiomhole’s fall.

With all these factors in place, one can be optimistic that the weather wave is pointing towards the APC, and with the stage set and the Abdullahi Ganduje’s committees deployed to work, many factors are already competing for attention in the choice of the next governor of Edo State.