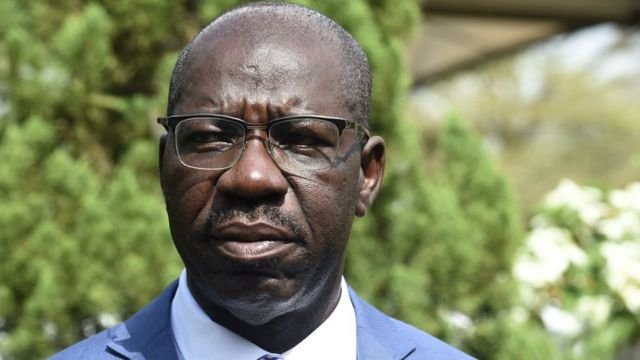 A statement by Obaseki’s Special Adviser on Media and Communication Strategy, Crusoe Osagie, said the incident occurred in Ward 10, Apana, where Oshiomhole hails from and that the thugs who he said were allegedly hired thugs were reportedly dislodged by a combined team of security personnel and vigilante groups, who repelled their gunshots. He said the state Deputy Governor, Comrade Philip Shaibu, gave them a hot chase.

However, an aide to Oshiomhole, Victor Oshioke, who hails from Apana, debunked the allegations saying the said gunmen were sponsored by Shaibu and that the vehicle they used was in the convoy of the governor.

Osagie said the pandemonium caused by the gunshots and the hurling of stones stalled the governor’s convoy temporarily before the Ward-to-Ward campaign train berthed at Adams Oshiomhole’s corridor at Apana Market Square in Ward 10.

He said: “As we were coming here (Village Square in Apana), you heard what happened. They went to hire thugs and began to shoot to prevent us from coming here. On September 19, 2020, use your Permanent Voter Card (PVC) to ‘pepper them’.

“Ward 10 is a special ward. This election is special. It will show who is in charge of politics in Edo State.

Oshioke told Vanguard on phone, last night: “The attackers were actually in the governor’s convoy, they drove ahead of the governor’s convoy from Ayoguiri and when they got to the village they started by destroying the billboards I mounted, the one mounted by Chief Lucky James, that of Nick Sedi and that of Jerome Adegboyega. Then they started shooting around, people ran away into the bushes and the governor ended up addressing members of his entourage because the villagers ran away. They destroyed a vehicle belonging to Wilson Idaewor. People have just started coming back to the community and we are going to make a formal complaint to the police. We ensured that our people did not retaliate so that it will not be reported that Obaseki was attacked in Oshiomhole’s ward, which we know was their intention.”

Meanwhile, the Independent National Electoral Commission, INEC, yesterday, said it would deploy no fewer than 20,000 ad-hoc staff for the conduct of the September 19 governorship poll in Edo State.

Prof. Bolade Eyinla, the Technical Advisor to INEC Chairman, Prof. Mahmood Yakubu, said this during a virtual meeting with journalists in Edo organized by the International Press Council, IPC, on the role of journalists in Edo election.

Eyinla said the recruitment of the 20, 000 ad-hoc staff would be done through INEC’s portal which he said had been opened.

He said that National Youth Service Corps, NYSC, members serving in Edo would constitute a larger percentage of the number, adding that the rest would be selected from the INEC ad-hoc recruitment portal.

“The youth corps members will constitute the larger percentage because they will be deployed mostly as presiding officers. The online recruitment is essential to create a database of election workers toward the conduct of the election.

“Also ongoing is the training of all security personnel to be deployed for the election. INEC has also come up with a code of conduct and rules of engagement for the security agencies.

“The code of conduct and rules of engagement will be distributed to all the security personnel deployed for the election to guide them properly.”

Eyinla added that the commission had designed an election policy within the context of the conduct of the election in a pandemic.

“So with these statistics from the NCDC, INEC has come up with a policy book with strict adherence to COVID-19 preventive measures and guidelines on the election so that everyone including the media can be guided.

“The uncollected PVCs have been deposited with the Central Bank of Nigeria, CBN, for safekeeping so that nobody can have access to them.