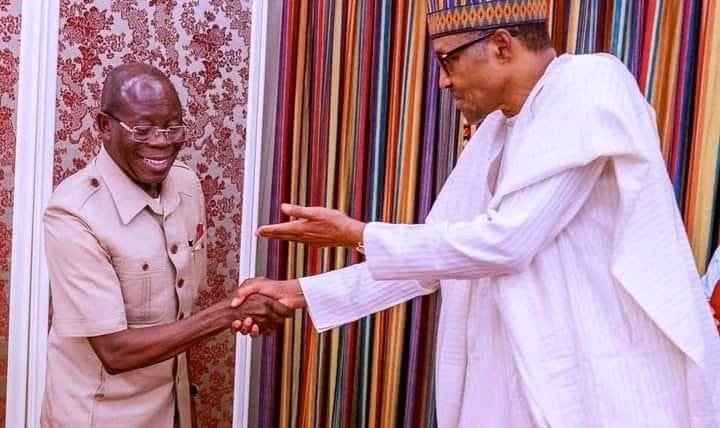 President Muhammadu Buhari has again warned political actors in the forthcoming Edo governorship elections to shun any act capable of disrupting socio-political order in the state.

The immediate past chairman of the All Progressives Congress (APC), Comrade Adams Oshiomhole, made the president’s feelings known to State House correspondents after a closed-door meeting with Buhari at the State House, Abuja, on Monday.

“I briefed him on what is happening – you know his attitude is always clear that Nigerian electorate, their rights must always be respected and anybody using unlawful weapons, violence, to intimidate the electorate the president will never support such causes.

Oshiomhole recalled that while he was in the NLC “Police couple of times shot and killed some of my supporters; I never asked them to go after the Police.

“ I had run elections as governors in Edo, three times, and there was no violence. “So, what has changed now that people are talking about violence, the people are still the same.

“The only thing that has changed is: who is the governor, who boasts of his immunity and so on.

“So, the president is excited at the process of having a free and fair election, devoid of violence and the fact that the laws are clear when people misuse firearms as to what should be done.

“The courts are there, the police are there and they will do their job.

“It doesn’t matter which party anybody belongs, the laws are the same.’’ On the allegation that he was planning to return as national chairman of the APC, Oshiomhole said he was not interested in re-contesting for the position.

He added that his central role in the ongoing campaign for the election of APC governorship candidate, Pastor Osagie Ize-Iyamu, had nothing to do with such interest.

“You see, what I want the media to interrogate is: when I was removed as national chairman, Edo was APC. So, do I have to win Edo to become the chairman? Do I look so unemployed? I’m 68.

“So, what they don’t understand is that it is not the office of chairman that made me who I am.

“It is my pedigree from my days as a laborer in the textile industry to be the general secretary of textile workers all over Nigeria and becoming the president of NLC.

“There is no village I go to that people do not know me. “It is this that I used to override the godfathers in Edo State for two consecutive terms and even got the governor elected through elections, no violence, before becoming the national chairman.

“So, if you remove the office…it’s like our president now, though I cannot compare myself to him.

“But it is like President Muhammadu Buhari, by 2023, when his tenure would have elapsed as President.

“But those who believe in him, in 2024 and beyond, each time they see him, that trust they have in him will always be there.

“He bonds with the people, that bond was not created by the fact that he is the president, in fact, he became the president because of that bond.

“So, it takes an empty brain to suggest that I only want to stage a comeback to become the national chairman. For what? To go and do a reset? “So, my attitude is not to reply to the noise.’’

Press Statement from the Office of the Speaker, House of Representatives August 17, 2020

Why we exempted ANDP Bayelsa gov candidate, by INEC