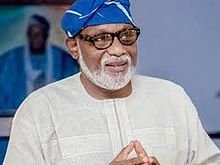 Some governorship aspirants of the All Progressives Congress (APC) who lost out to Governor Oluwarotimi Akeredolu at the party’s primaries have been drafted into the campaign council.

Ondo Commissioner for Information and Orientation, Donald Ojogo, was appointed Chairman of the Media and Publicity Committee while a spokesman for the APC, Alex Kalejaiye would serve as Secretary.