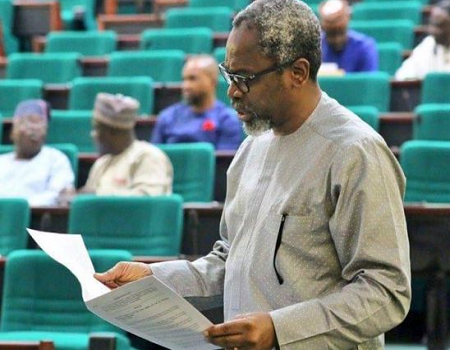 The House of Representatives on Thursday rejected the presentation of the Central Bank of Nigeria (CBN) on the $11 billion withdrawn from the Excess Crude Account for the National Integrated Power Project following observed discrepancies in its presentation and that of the Accountant General of the Federation.

The Adhoc Committee set up by the House to investigate the power sector however stepped down the consideration of the report presented to it by the Governor of the Central Bank of Nigeria Godwin Emiefele.

The Central Bank Governor was invited to by the Adhoc Committee investigating the power sector to explain the withdrawal and other the N1.514 trillion Nigerian Electricity Stabilisation Facility intervention fund approved and disbursed to Nigerian Bulk Electricity Trading (NBET) Company after post-privatization exercise.

But the CBN Governor who was represented by his Deputy, Adebisi Shonubi would not speak on the withdrawal, but only shed light on the funds given to NBET.

But the lawmakers decline the consideration of the CBN Governor’s report because the figures presented contradicted those presented to the committee by the Accountant General of the Federation (AGF), Idris Ahmed, and other stakeholders during its previous sitting.

Emiefele said that in line with the Federal Executive Council (FEC) approval, a total sum of N213 billion for NBET out of which the sum of N189.1 billion has been released so far.

He said the sum of N60.8 billion has been repaid by the operators who accessed the fund through NBET.

Emiefele said that the apex bank also approved the sum of N701 billion for the Nigeria Electricity Stabilisation Facility, out of which the sum of N694.98 billion was disbursed as of December 2018.

He said further that out of another N600 billion approved for NBET, the sum of 85.41 billion has so far been disbursed based on NBET advice.

While stressing that liquidity remains a major challenge facing the industry, the CBN explained that all the intervention funds were 100% guaranteed by the Ministry of Finance on behalf of the Federal Government.

Responding to question bothering on the state of the crisis bedeviling the power industry, the CBN Governor faulted what he called failure to adhere to the original intendment of the power sector reform, stressing the need to “go back to the intention when the first intervention was conceived.”

On the assessment of the utilization of the N1.514 trillion disbursed as contained in the CBN Governor’s report, he said that NBET is solely responsible for such oversight.

Emefiele also explained that funds were provided with the view to enable the new investors to clear the legacy debts inherited from the defunct Power Holding Company of Nigeria (PHCN) before the privatization of power assets.

However, reviewing the CBN Governor’s presentation, Chairman of the Committee, Rep. Doguwa chided the apex bank for undermining the institution of the Parliament, while frowning at the discrepancies in the presentation of the bank.

Doguwa said: “As I said earlier on, part of the issues we find ourselves, this issue has to do with facts and figures you have presented. I believe you can agree with me those of you are very used to numbers and tabulation can quickly rush into this kind of calculation and make recommendations thereafter.

“I want to speak on behalf of my members that this presentation of this nature with this kind of sensitivity on the disbursement of funds of N600 billion, N701 billion.

“As far as we are concerned is a very huge amount of Nigerian taxpayers money that basically we need to have to take some time to look at. While we are doing that, we will come up with necessary observations that will be there for you to provide answers.

“Without taking the risk of going back to what I said earlier, doing this in this kind of manner makes our work practically difficult dealing with huge amounts of money.

“Sometimes, we are also taking contrary submissions from other agencies. Like in the case of the N600 billion from which you now succinctly said that you have only disbursed N85.4 billion, the records we have gotten from the Ministry of Finance is completely different to a significant amount of money.

“The NBET also made similar statements. If these three or two other agencies were here or of you the Almighty central bank was there then, I think these are issues we can just put our heads together and resolve it and find out where the problem lies.

“I believe we still have a very difficult work to handle. I want to once again emphasize that we appreciate the time that you have spared to honor the people of Nigeria in the parliament. That’s notwithstanding, I still want to say that some of these things may not be exhaustively discussed here today. So, I will allow members to still go ahead and ask questions based on what they have been able to comprehend.”

While stressing the need to halt deliberation on the CBN Governor’s submission, Doguwa who is also the House Leader said: “I will allow members to ask questions but with the restriction, please reserve your questions on this submission for now because you basically need time to study this submission and at the end, we can do the right thing at the right time, so that we can subsequently guide the House appropriately.”

The Accountant General of the Federation had in an earlier presentation to the Committee claimed that the sum of $8.234 billion expended on the National Integrated Power Project between 2005 and 2007 from the ECA by the Federal Executive Council comprising the State Governors.

Also making a presentation, Director General of Debts Management Office (DMO), Ms. Patience Oniha, said that a $1 billion Eurobond commercial loan was sourced from investors at commercial rate sequel to the approvals of the Federal Executive Council and National Assembly for the power sector.

She also told the lawmakers that of the $150 million loans sourced by Rural Electrification Agency (REA) under the Nigerian electrification Project, out of which $0.71 million (representing 1.47%) has so far been released to the agency by the Development Partner and attracts 5 years moratorium with a 20 years repayment plan.

APC Reward and Recognition Scheme: The Time is now!