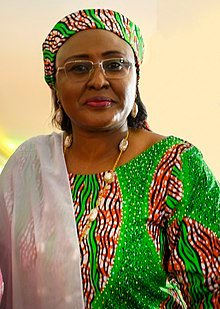 In order to cushion the effect of the globally ravaging COVID-19 on women in Delta State communities, the President”s wife, Mrs Aisha Buhari, has empowered women in the state with cash gift through the National Directorate of Employment, a micro Enterprise Enhancement Scheme, Delta State Chapter.

The programme which took place at Beeland Hotel in Udu in Udu Local Government Area over the weekend was unique in many perspectives.

Dr Mrs Janet Oyubu presenting cash gift to one of the beneficiaries of the NDE empowerment programme held in Beeland Hotel in Udu LGA over the weekend.

In her address, the wife of the President, represented by Mrs Janet Oyubu said she was concerned about the plight of women especially the rural dwellers having gone through financial stress occasioned by the COVID 19 pandemic saying she decided to assist them with a token to enable them to start a petty trade to be able to take care of their family since many women are breadwinners in their families.

Mrs Buhari also charged women to always contribute their quota to the advancement of the country for the good of all.

She said the scheme was meant to empower 250 rural women across the 25 local government areas of the state; adding that this is the first phase and the subsequently, other phases would follow.

A total of 1,200 women are targeted for empowerment.

She said after six months, the beneficiaries would be appraised to know how they used the money adding if there is meaningful progress, they would not only be given more money but given different skill acquisition programmes which would be based on how to make soap, bead, and others.

The wife of the President, who was represented in the state by Dr Mrs Janet Oyubu said President Muhammadu Buhari led government is poised to reposition the country for speedy growth and development after the COVID- 19 pandemic.
.
She said:” many women from the rural areas are the breadwinners of their family so, the federal government deemed it fit to assist them( women) with the token to enable them to engage in whatever business of their choice to feed their family”.

She, therefore, advised the women to make judicious use of the money by engaging in petty trade as they would give another money after six months after the appraisal of their performance in this regard.

She expressed thanks to President Muhammadu Buhari to have. given the needed support for the programme to be a successful one just as she thanked the Honourable Minister of State for labour, Hon Festus Keyamu (SAN) and others who made the programme a success.

On his part, the Director-General of National Directorate of Employment, Dr Nasir Mohammed, said the programme is aimed at empowering women in the state generally and not for party affiliation.

The Director-General of NDE who was represented by the State Co-ordinator, Mr Olu Chuxs Tony, said the programme would be in phases as, after this group, another group of women would follow suit.

He, therefore, advised the beneficiaries to make good use of the money given to them in order to achieve the purpose for which the programme. is meant.

He said: ‘ the token being given out today is to assist the rural women to start small scale business to enable them to take care of their family”.

The beneficiaries of the empowerment programme expressed their joy an appreciation to the wife of the President, Mrs Aisha Buhari and the Director-General of National Directorate of Employment for the cash splash and promised to put the money into good use by embarking on petty trade in order to take care of their families.

They also thanked the Minister of State for Labour, Hon Fetus Keyamo (SAN) for working in conjunction with the Director-General of National Directorate of Employment and other stakeholders in this regard which has paved way for the empowerment given to them.

The highpoint of the ceremony was the presentation of the cash gifts to the beneficiaries amidst applauses.