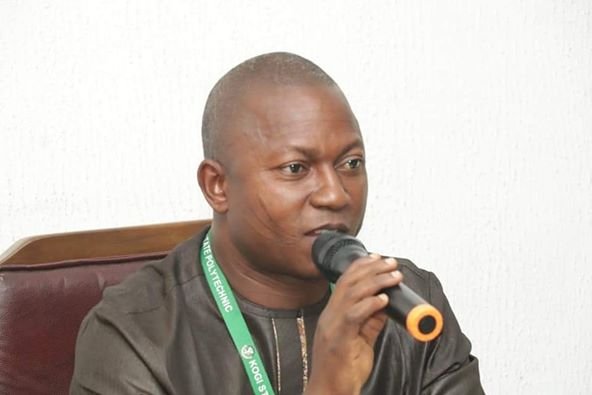 Share FacebookTwitterWhatsAppEmailTelegram
The Acting Rector of Kogi State Polytechnic, Lokoja, Dr. S.O. Usman has reiterated his readiness to reposition and equip the Security Unit of the institution to make it more proactive in handling security challenges.
The Rector who disclosed this at a meeting with the Principal Officers and staff of the Security Unit in his office on Monday, 17th August, said the arrangement was already in place to provide hi-tech security equipment to ease the operations of the security personnel.
He stressed apart from CCTV apparatus which were about to be mounted in strategic locations in the Polytechnic, Radio that could cover 50 kilometers radius would be supplied to ease communication among personnel while on duty.
Related Posts

Dec 1, 2022
He added that solar and halogen lamps that would illuminate the campus at night would also be mounted to make the work of the personnel easy.
Dr. Usman further disclosed that plans to purchase torchlight, shock, tear gas canisters, and hard cuffs that could assist in the effective security operations were also in place.
He emphasized that the major focus of his administration is security, Information and Communication Technology, and Public Relations, and added that it was in pursuit of the security vision that a model security building was erected within his first 100 days in office.
He added that it was in a bid to solve the problem of shortage of security personnel that the two-shift system was introduced as against the hitherto three-shift arrangement.
He further disclosed that welfare packages geared towards motivating the personnel were being prepared for them.
Dr. Usman, therefore, encouraged them to be dedicated to duty, show maximum cooperation, commitment, sincerity, and loyalty.
He stressed that since their job does not require carrying of arms, they should always beware of the need to rely heavily on intelligence gathering, movement control, and detection of early warning signals on crimes and criminalities.
The other Principal Officers who spoke, in turn, encouraged the personnel to be courteous and have the fear of God in the discharge of their duties.
They added that since they are the first point of contact in the Institution, they should avoid drinking alcohol before coming to the office so as to guard against misbehavior and negative publicity that it would generate.
In separate remarks, the Acting Chief Security Officer, Mr. John Haruna, and other personnel who were at the meeting appreciated the Acting Rector and his team for the great work and recognition given to the security personnel and vowed to continue to work with absolute commitment and loyalty to the institution.
Compiled By:
Uredo Omale (Mrs)
Head, Public Relations, and Protocol Unit.
Kogi State Polytechnic, Lokoja.
5
Share FacebookTwitterWhatsAppEmailTelegram