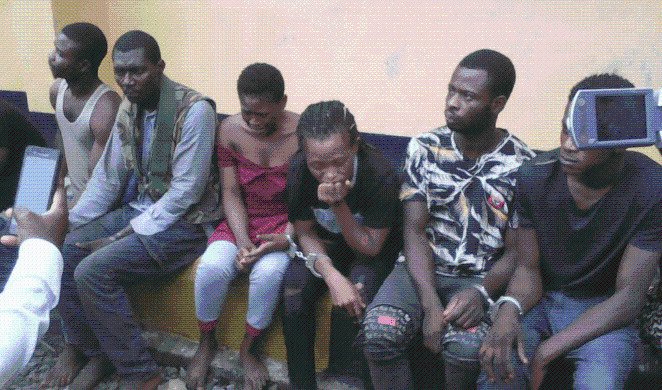 It is often common for male suspects to be involved in criminal activities but the trend was reversed in Abia State as two female suspected armed robbers were among the 47 suspects paraded on Wednesday by the state Police Command at the command’s Headquarters in Umuahia.

The two, Nancy Chris and Obinna Chika, both from Lokpanta in Umunneochi Council Area of Abia State, however, denied being robbers.

Narrating her version, Chris said she was arrested and accused of snatching a Qlink brand motorcycle from its rider/owner after the commercial motorcycle was snatched by a young man who wants to marry her.
According to her, she took a bike ride from Umuahia to Lokpanta. When she arrived at her destination the young man who wants to marry her dispossessed the owner of the bike.

“Then about three weeks later the man who was dispossessed of his motorcycle saw me at Okigwe town and raised the alarm, shouting, ‘this is the girl that snatched my motorcycle, please help.’ There and then, the people rounded me up and handed me to the police. But honestly, I didn’t know that the boy was a criminal.”
Her partner, Chika, said she was arrested because she used her phone to call Nancy when she was said to be hospitalized.

She said: “I was in my village in Lokpanta when a young man we call Alhaji came to inform me that Nancy was in the hospital. I dialed her line to confirm only for a male voice to pick from the other side. He asked where I was, I told him. The next moment they came for me.”

But Nancy confessed that it was Chika that arranged the relationship between her and the criminal-minded young man.

Parading the suspects, the first since her resumption of duty in April this year, the Abia State Commissioner of Police Mrs. Janet Agbede, said, the duo were arrested on August 5 by operatives of SARS.

She said they specialized in robbing motorcyclists of their motorcycles at gunpoint.

“Later on the same date, one Sunday Okoro of Ubahu Okigwe, Imo State came and identified the suspects who had dispossessed him of his Red Qlink motorcycle. It was, however, revealed that the suspects connive with their male friends in the act,” she said, adding that investigation was in progress.