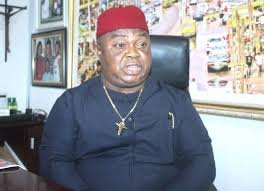 Ohanaeze Ndigbo Youth Council Worldwide (OYC) has accused the Peoples Democratic Party (PDP) of making plans to pick its presidential candidate for the 2023 election from the north. The Igbo youth group in a statement released by its president-general, Mazi Okechukwu Isiguzoro, cautioned the opposition party against the alleged plan, saying Igbo president in 2023 is non-negotiable, The Nation reports.

2023 presidency: Ohanaeze accuses PDP of plotting to field a northern candidate. Photo source: Channels TV Source: UGC The group said it was alarmed that despite voting massively for the PDP since 1999, the party might be treating the Igbo as “cows that must not only be milked but used to death.” The OYC said though the Igbo presidency will not solve “all that bedevils the Igbo, it “will assuage and comfort, will offer that sense of belonging, and will pursue devolution of powers and industrialization.” “While watching the events leading up to 2023, the OYC has observed some troubling developments. “Igbos have voted massively for the PDP since 1999 but it appears that the PDP regards the Igbos as cows that must be milked and used to death. The PDP is making subterranean diabolical plans to retain power in the North in 2023. “OYC wishes to make it abundantly clear: The PDP must not insult the intelligence of the Igbo. “If the PDP thinks the Igbo will wait till 2031 before it gets a chance at its presidential ticket, then the PDP isn’t just treacherous, it is delusional. Perhaps the PDP doesn’t need Igbo votes,” the statement read in part.

Igbokwe who is also a special adviser to the Lagos state government on water resources said that such Nigerians should throw away the idea of northern presidency come 2023. The APC stalwart pointed out that Nigeria has an unwritten law that allows power rotation among the geopolitical zones