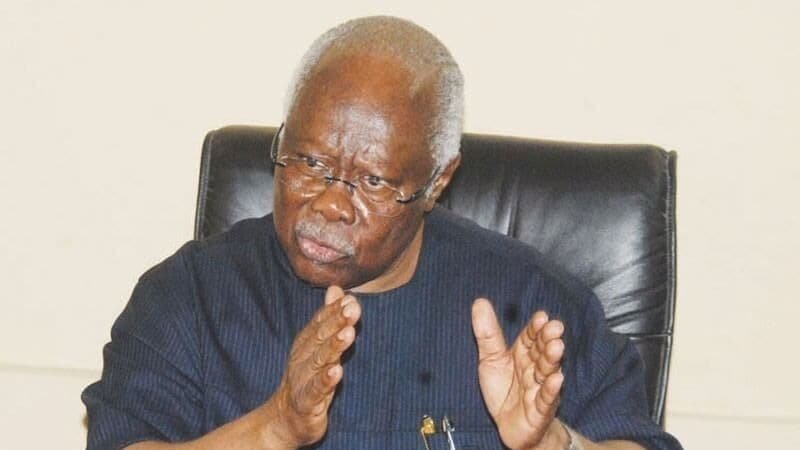 Chief Olabode George has warned that any attempt to dump power rotation in the country may jeopardize or scuttle the nation’s democracy. George, a former deputy national chairman of the Peoples Democratic Party (PDP), made the assertion in an interview with Daily Sun newspaper. According to him, zoning is the pillar that has been helping to hold Nigeria together, adding that it cannot just be abandoned as the country prepares for another round of elections in 2023.

Chief George is of the opinion that zoning keeps Nigeria united as one country.

His words: “Generally speaking, if we are to follow the principle of rotation, the presidency should revert back to the south in 2023. Ideally, it will be good for us to keep rotation. It is what has been binding Nigeria together, and it is not unique only to us as a nation. “We should be careful how we treat the issue, otherwise, it is a subject that if not well handled can jeopardize the nation’s unity.” Asked if he would prefer a competent person from any part of the country is supported to emerge as president as opposed to the idea of power rotation in 2023, Goerge said: “Zoning and rotation must go hand in gloves. It is not only in Nigeria that it is being done. “Switzerland is made up of French, the Italians, and the Germans. The French have their own capital in Geneva, the Italians in Lugano, and the Germans in Zurich. The three rotate power among themselves.

“Zoning is a novel idea in Nigeria and if anybody is talking about competence, there is no problem about that. There is no part of the country whether it is in the north or in the south where you don’t have competent people who can run the country. But what we are talking about is an arrangement that will sustain the nation’s unity. “It is only when we have restructured and carry out devolution of power that we can now talk about dumping zoning but without restructuring first, any attempt to dump zoning will backfire.

“It will have a negative impact on the nation’s democracy. Zoning is the pillar that holds the nation together, and any attempt to dump it may threaten the nation’s democracy.” Meanwhile, Vice President Professor Yemi Osinbajo has played down any rumor surrounding his political ambition in 2023. Osinbajo who spoke at a virtual conference of the Nigeria Bar Association said his current focus is on serving Nigeria and not about the presidential election.

Legit.ng recently reported that a group, Ndigbo Lagos, has said the zoning of the next leader should be rotated to the southeast geo-political zone and not to any other Igbo speaking zone. The umbrella body of the Igbo nationality groups disclosed this in a statement signed by its president-general, Gen Obi Umahi (Rtd), on Friday, August 21. According to Ndigbo Lagos, when it is the turn of other Igbo speaking zones they can seek the office of Nigerian president from where they fall into either south-south or northcentral. 2023 election: Why a northerner should be President again – Shettima

The Jury is out and it wasn’t the Pastor