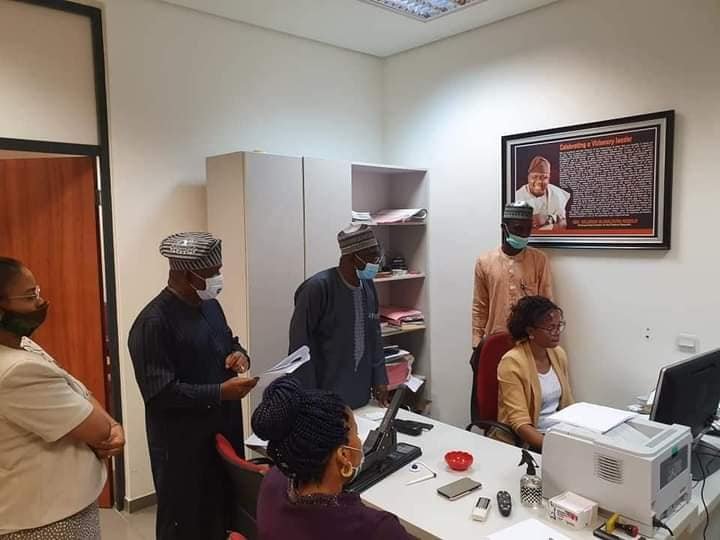 Share FacebookTwitterWhatsAppEmailTelegram
Senator Jibrin Isah has to stay up late into the night at the Senate building, to work jointly with Senate Committee on Finance and National Planning on all Revenue generating Agencies who are still taking Federal budget causing deficits in Revenue turnover that should have been sufficient other ventures like Infrastructures, Social amenities, etc.
We hear over-bloated figures to the tone of trillion daily from these Agencies, only semicircular or meager is remitted to CBN. Joint Senate Committee on Finance and National Planning have been working on this.
First to remove those Agencies from Federal allocations secondly, to ensure their Presentation tallied with the figures forwarded to them for consideration and approval of their various budget, Expenditures, and their fiscal projections for 2021-2023.
It has become conventional in our national system of late that whenever a DG or any head of Government Agencies is billed to appear before any probe panels, they either developed sudden ailment that will take them abroad, faints in the process of the probe or send their Subordinate on account of indisposed. Because they can’t be accountable for their financial dealings. This and many more are what Sen Isah Jibrin Echocho is jointly working with others to correct the abnormally. It’s more than District representation, this is National assignment.
Related Posts

Dec 2, 2022
We heard of Eleven (11) years of marriage between NTA and Chinese Startime, yield zero benefits to the National Treasury.
We heard of Security and Exchange Commission(SEC) Representative(s) telling journalist that she had a bad day, after she couldn’t come close to details of how meager from #2.1trillion generated were only remitted to CBN. The DG was nowhere to be found.
Even DPR only remitted 44.5billion from 2.4trillion Revenue is generated in the 2019 fiscal year. Very unfortunate!
Recalled that Echocho with his colleagues in Finance and National Committee sometime in June remain in the Senate building till 10 pm to work on the Report of the Revised 2020 Appropriation (Amendment Act) Bill and Medium-term Expenditure Framework/Fiscal Strategy Paper(MTEF/FSP), which was due for presentation at the plenary the next morning, preface to the passage of new Appropriation Act occasioned by the effect of Covid-19. This is gross reputable National duty.
10
Share FacebookTwitterWhatsAppEmailTelegram