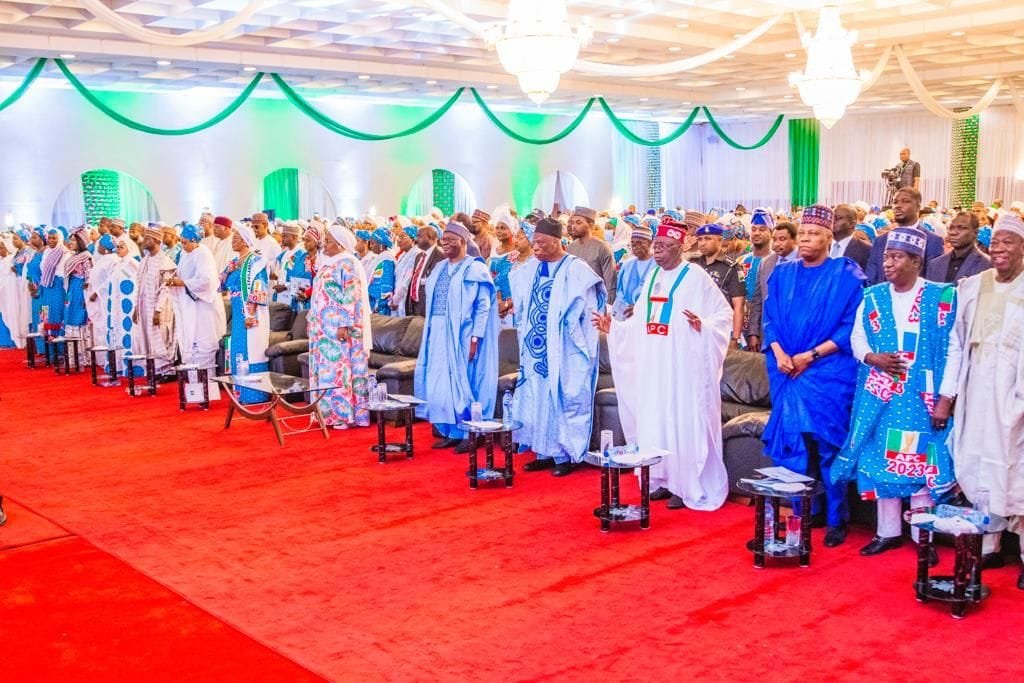 A glittering array of heavyweights of the ruling All Progressives Congress (APC) today (Wednesday, 16 November, 2022) converged on the Abuja International Conference Centre (AICC) where the Tinubu/Shettima Grassroots Independent Campaign Council held a retreat.

The AICC’s Aso Hall venue of the event was filled to the brim with some of the party’s who’s who.

Among the political titans who graced the event were two former Governors, Tanko Al-Makura (now a senator, and former Governor of Nasarawa state) as well as Malam Isa Yuguda (Bauchi state).

Chied Ogbeh, a Christian, said he knows the duo personally, insisting that they are no religious fundamentalists.

He said: ‘’Both Tinubu and Shettima have never shown any sign of religious extremism.’’

The former Minister was optimistic that Tinubu will win the 2023 presidential elections and urged Grassroots Independent Campaign Council to get the job done.

Also speaking, Al-Makura, who predicted that the elections would be ‘’scientific and pragmatic unlike before’’, however, described Tinubu as ‘’a highly cosmopolitan leader, versatile in social, economic, cultural and other values, and is a listening leader’’ and who will win the presidential poll.

On Shettima, the former Governor said he is ‘’a go-getter.’’

According to him, Shettima, as Borno state governor, faced the sort of crisis the North-Eastern state had never known in its history—the Boko Haram insurgency—,pointing out that it goes a lot to show the character of the vice presidential candidate that rather than flee Borno during the crisis, he stayed back to tackle the challenge.

Another speaker, Arc. Bulama, stressed that President Muhammadu Buhari is a stickler for accountability and transparency in elections, saying the president has always believed that the will of the people must prevail.

Bulama stated that the achievements of the APC federal and state governments are ‘’too many, but under-reported’’, insisting that people at the grassroots should be consistently informed of these accomplishments which, he noted, have changed lives for the better.

Speaker after speaker rated APC’s electoral chances high, declaring that it was the party to beat.
Certificates were later handed to different state coordinators of the Grassroots Independent Campaign Council.
National Coordinator of the Council, His Excellency Ali Silas Agara, its Director of Media and Publicity, Ntufam Hilliard Eta, as well as all the top officials were on hand to see to the success of the event.
19
Share FacebookTwitterWhatsAppEmailTelegram

Tinubu To CAN: I won’t Run My Administration On Religious Bias