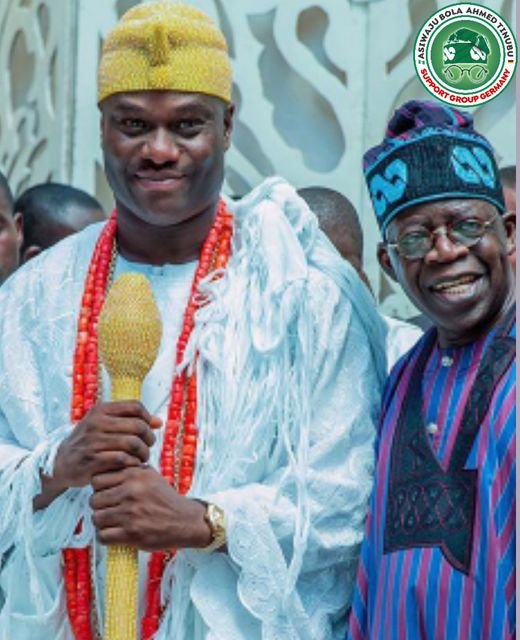 Share FacebookTwitterWhatsAppEmailTelegram
The Ooni of Ife, Oba Adeyeye Enitan Ogunwusi described the Asiwaju of Lagos and National leader of the All Progressives Congress (APC) as a patriotic Nigerian Elder Statesman and Pan-Africanist.
The royal father pointed out that as a politician, Asiwaju Tinubu has “been an outstanding leader and quintessential bridge-builder” saying, “as a Senator of the Federal Republic of Nigeria, he stood firmly with the masses till he went into exile where he continued alongside other patriots in the struggle for democracy which was won on the 29th May 1999”.
“Kabiyesi, Ooni sees Asiwaju Tinubu as an eminent descendant of Oduduwa, patriotic Nigerian Elder Statesman and Pan-Africanist to the core who remains a great inspiration to the African youths for he has in no doubt spent the larger part of his life worthy of emulation,” he said.
Related Posts

Dec 2, 2022
Ooni Ogunwusi in the statement added that Asiwaju Tinubu as a school student designed his focus very carefully and realizable while as a“professional in the private financial sector, he remained focused and discharged his duties creditably well”.
“As a governor, he left a legacy of excellence that continues to make Lagos a socio-economically enviable society within the committee of the globally recognized cities in the world.
Celebrating this icon whose philanthropic generosity has impacted meaningfully on the masses and whose exemplary political sagacity has been of immense benefit to several public office holders across especially in Nigeria.
The Ooni then prayed that may God Almighty “bless the rest of Asiwaju Tinubu’s journey of life with good health, long life and a plethora of fulfillments”.
30
Share FacebookTwitterWhatsAppEmailTelegram

HOW PRESIDENT BUHARI IS TACKLING FOOD INFLATION IN THE COUNTRY