Shaibu rendered irrelevant in his Jattu ward as Oshiomhole, Ize-Iyamu gets heroic welcome despite violence act by Deputy Governor 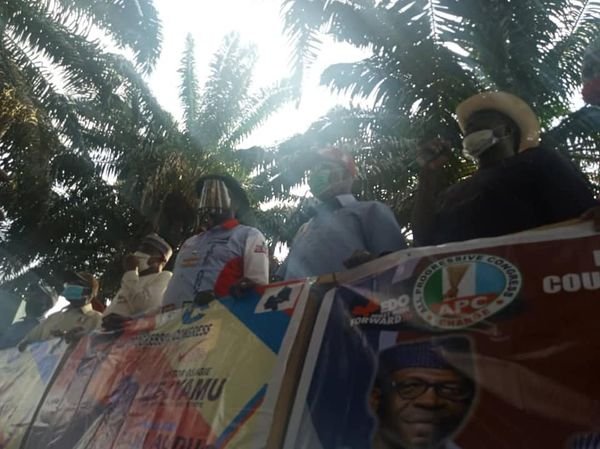 Share FacebookTwitterWhatsAppEmailTelegram
The supreme excellence is not to win a hundred victories in a hundred battles. The supreme excellence is to subdue the armies of your enemies without even having to fight them.
ChrisOsaMedia reported that the 26th day of August was an auspicious day for the people of Jattu ward as they trouped out in their numbers to welcome Comrade Adams Oshiomhole, Pastor Osagie Ize Iyamu and the APC campaign team, chants, and joyous blasts surrounded the ever calm atmosphere of Jattu ward as individuals stormed APC campaign ground, political Juggernauts from all walks of life took out time to grace this event.
However, this wasn’t a joyous moment for the ”outgoing” Deputy Governor of Edo state, Phillip Shaibu as he already tried to cause destruction with his thugs. These armed thugs previously destroyed two different platforms on two different occasions.
Not just that, these men drove people who were putting finishing touches to the APC campaign ground. They tried to put a stop to the successful APC ward to ward campaign but all their efforts have proved abortive.
Related Posts

Nov 26, 2022
Candidate of the APC Pastor Osagie Ize-Iyamu and his running mate Hon. Gani Audu couldn’t hide the joy on their faces, as they promised to meet with yearnings of the people by implementing the *SIMPLE AGENDA* when voted in as Governor and Deputy Governor of Edo state respectively.
Adams Aliu Oshiomole commended the people of Jattu for resisting Shaibu and his thugs. He was astounded with the population that stormed the campaign ground. Adams Oshiomhole, while describing the thuggery activities of Philip Shaibu said APC will not run on the street with a mad man.
He further added that anyone who picks up a challenge with a mad man on the street automatically becomes mad, hence the party prefers to maintain peace.
Further speaking, Adams Aliu Oshiomole advised the people of Jattu that their mandate shouldn’t be bought no matter the cost. He used this medium to preach against violence and other electoral misdemeanors.
APC is bid to continue the ward to ward rally today with Owan West LGA.
32
Share FacebookTwitterWhatsAppEmailTelegram