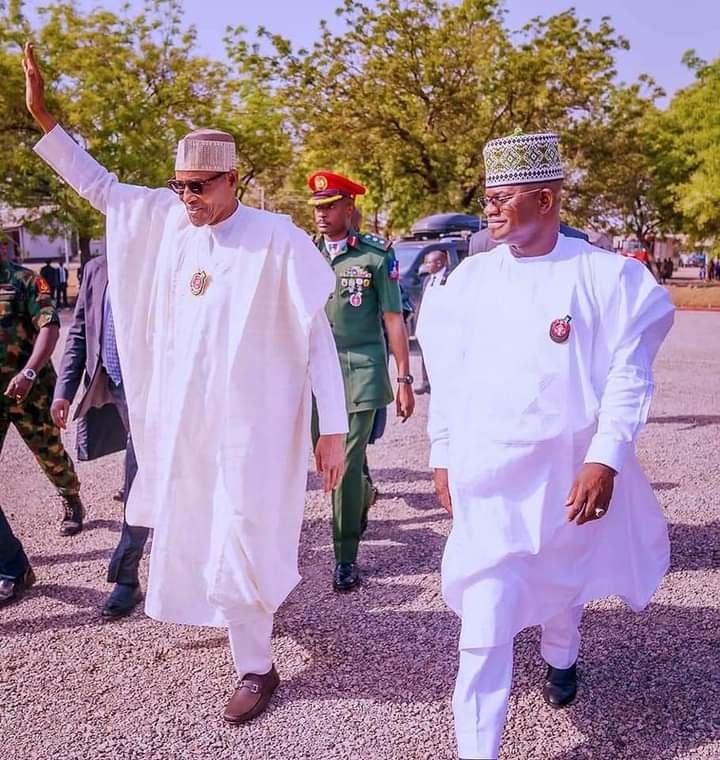 President Muhammadu Buhari, on Thursday, said he was impressed by the performance of Governor Yahaya Bello in Kogi State, noting that he had particularly done very well in the area of security and projects execution.

The President specifically said the Federal Government was proud of Governor Bello, who he said had shown proof of the All Progressives Congress’ overall sterling performance in Nigeria.

He spoke during his working visit to Kogi to commission myriads of legacy projects executed by Governor Bello’s administration.

“We are an Administration that prides itself in the fulfillment of our electoral promises to the Nigerian people, at both national and sub-national levels. This is why I am glad that we have an impressive array of legacy projects through your own state government as proof of our stewardship in Kogi State,” President Buhari said.

“I am impressed by the performance of Governor Yahaya Bello. He has done very well in the area of security and projects execution in Kogi State. We are proud of him and we urge him to do more for the people. I am appealing to the people of Kogi State to support him so that he can achieve and deliver more dividends of democracy,” he added.

The President, who was very happy to see the impressive projects during his visit, at the Reference Hospital, Okene, congratulated the Governor again, saying, “if one wants to see everything here, he will get lost.”

He said, “I have been briefed by Yahaya and his team on the myriad of projects we would have loved to commission for you across the State, including the brand new Confluence University of Science and Technology (CUSTECH) at Osara, the Confluence Rice Mills at Ejiba,
the various Township roads networks at Idah, Okene and Kabba and intra-state roads in the three senatorial zones, massive erosion works at Ankpa, Ogugu and other places, as well as
other roads, hospitals, schools and sundry vital infrastructure.”

The President also noted that his administration was working to reposition Kogi State as an investment hub through the activation of solid minerals in the state, promising that the Ajaokuta Steel Company would be revitalised soon.

In Kogi State, he commissioned the first-of-its-kind Ganaja flyover project, the world-class Reference Hospital in Okene, the newly constructed Palace of the Ohinoyi of Ebiraland, Ultra-modern GYB Model Science Secondary School, and Muhammadu Buhari Civic Centre, among other projects.

In his remarks, Governor Yahaya Bello said, “Today remains a historic day in the lives of the good people of Kogi State.

“We were happy the very day you granted approval to come to Kogi State for the commissioning of a few out of the many projects this administration has executed for the people of Kogi State.

“When I was sworn in on the 27th of January, 2016, we were determined to serve our people and we quickly commissioned a multi-dimensional committee to form what we call new direction blueprint.

“From that period till date, this particular document has served as a guide for accelerated development in Kogi State.

“Mr President, we hit the ground running and you told me to be courageous in Leadership and also taught me how to bring out my best, and today, the projects are an attestation of our best to the people of Kogi State. I followed your footsteps in ensuring projects and infrastructures that have direct impact on the people.”

Gov. Bello appreciated all the support to Kogi State, and appealed for the completion of Ajaokuta steel company, adding that no nation could achieve industrialisation without iron and steel.

“We are still confident that your effort toward revitalization of the steel company will still be achieved before the expiration of your tenure,” he said.