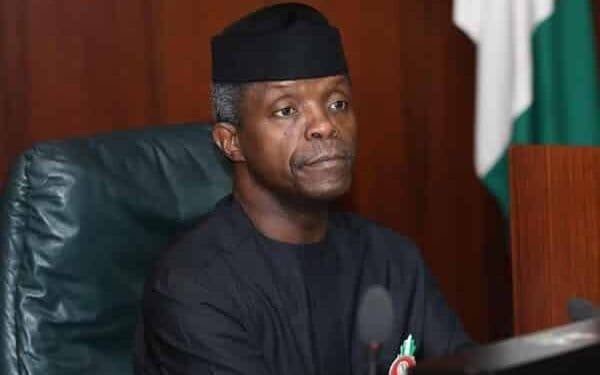 The school was built under the aegis of the Office of the Senior Special Assistant to the President on Sustainable Development Goals (OSSAP-SDGs).

Leaders and residents of the community trooped out to welcome the vice president who was represented by Deputy Chief of Staff to the President, Mr. Ade Ipaye.

Speaking with newsmen after the inspection of the school, District Head of Gui, Alhaji Alhassan Yusuf, expressed appreciation to the vice president for bailing the community from the ‘poverty of education.’

According to him, the community is six kilometers from the expressway and the road is really bad.

He said that during the rainy season, their wards find it difficult to go to school at Sauka because of the bad road.

“So, when we lost our son, Gomina, and the vice president came to this community to condole with us, I seized the opportunity to make the request for the renovation of our school, and a day after I made that request, the project was approved.

“Work started on this project barely six months ago and it has been completed already.

“What is left now is for the Ministry of Education to come and supervise the operation of this school.

“On behalf of the Gui community, I sincerely thank the vice president for what he has done; we pray that God will continue to protect him both in and out of office.

“We will also be praying for him, in case he wants to further his political career, he will be the President of this country; we thank him greatly, and may Allah bless him and his family,’’ he said.

On his part, Danjuma Dauda, Secretary of Programmes, OSSAP-SDGs, said the project was done in the light of SDGs GOAL 1 – no poverty, quality education.

He said that the school was built in furtherance to the implementation of the SDGs in Nigeria, adding that the community was quite appreciative of what the government had done.

Osinbajo had earlier in the village inaugurated a 3-bed flat and a shop donated to Gomina’s family.

“I pray that we will not see tragedy again; that the family left behind by the deceased will continue to thrive and grow to stand on their own without any cause for regret.

“We also pray for the community; that this community will continue to make progress,’’ he said.

Speaking with newsmen on handing over the building to the family of behalf of the vice president Ipaye said it was a good gesture for the family and the community.

He said that they suffered a great loss in the death of their illustrious son, Gomina earlier in the year.

“He left behind quite a large family and the vice president was here to commiserate with them.

“At that occasion, the issue of a building for the family was muted and the vice president kept that in mind and has assured that it has become reality.

“I am glad to go through what has been put on the ground here today; I see that the district head, the community, and the members are really happy.

“Not only does the family have a bungalow, but they also have a shop where they can do some trading activity to be able to sustain themselves; we thank God that this has indeed, come to pass,’’ Ipaye said.

Gomina’s son, Hussein, thanked the vice president on behalf of the family.

Hussein said the gesture had brought overwhelming joy to the family and would help members of the family to overcome their grief.

The unity of Nigeria is my major concern, says Tinubu