PDP Crisis: Atiku Faces Rejection In His Victory Base 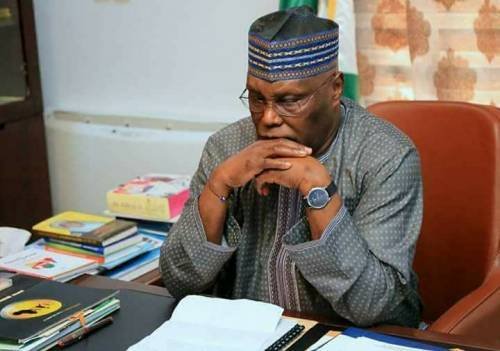 Share FacebookTwitterWhatsAppEmailTelegram
The seemingly endless crisis rocking the boat of the peoples Democratic Party, PDP, may be far from reconcilation following the glooming absence of pro Wike group during the inauguration of its presidential campaign in Uyo on Wednesday.
The PDP, as it stands has glaringly appeared to be an opposition party to itself as the disharmonious fall out of its presidential primary elections has proven to have disjointed the party’s ligament of peace thereby making itself to be a proverbial house divided against itself and as you probably know, such a house cannot stand. PDP has through its in-house acrimony lost its  footing as an opposition party and it has also lost the needed vibes to coordinate its various campaign activities.
His Excellency, Governor Nelsome  Wike, the governor of River state, who was the first runner up at the PDP’s presidential primary elections has alleged gross Injustice against his candidature which according to him was a total deviation from the Canon of democratic practice. He has since made the Ill treatment known during a plethora of his public addresses. Meanwhile, about four other governors elected on the same Party’s platform are alleged to be in his camp with numerous party’s supporters.
Governor Wike also premised his grievance on the obstinate stand of the party’s national chairman, Senator Iyorchia Ayu to resign from the Party’s number one seat based on his promises of relinquishing the seat if the presidential candidate of their party emerges from the northern region of the country. With PDP having Alhaji Atiku Abubakar as its presidential candidate since he hails from Adamawa state, the north Eastern part of Nigeria, Governor Wike is of the view that the party’s national chairman should be relieved of his position through resignation so as to give room to political balancing and politics of all inclusiveness. Governor has also alleged to have said that, the party’s presidential candidate confided in him shortly after the former emerged as the PDP’s candidate that the national chairman must resign. But neither Alhaji Atiku nor Senator Ayu agreed to walk their talk.
From whatever side of the divide PDP’S crisis emanated from, one thing that is certain is the fact that, there seems to be a lack of systematic handling of the crisis which appears to be deepening on daily bases. Governor Wike who is the arrow head of this crisis has constantly maintained that his call for Justice within the party goes beyond his inability to win the presidential primary elections which he said was skewed against him. He has also said that he was only after justice, fairness and equity within the party. But political lenses have seen him having meetings with presidential candidates of other political parties despite his continued insistence of not leaving the party.
Related Posts

Dec 1, 2022
His meeting with the Presidential candidate of the All Progressives Congress , APC, Senator Bola Ahmed Tinubu in London a few weeks ago has raised a lot of dust. A heavy dust like those from the Sahara desert that has refused to settle. Some pundits believed that the meeting was aimed at striking a political alliance in favour of the APC. However, with the existence of the allegedly never ending animosity between the former governor of the state, Mr Rotimi Ameachi and governor Wike , political analysts still believe that having both of them in the same party is akin to having two experienced captains in the same boat.
As the PDP’S crisis deepens, governor Wike has  also been sighted having a series of meetings with the presidential candidate of Labour Party, Mr Peter Obi. More interesting was the meeting Mr Wike had with the Labour Party’s presidential candidate in London which was believed to have been brokered by the former president, Olusegun Obasanjo. Wike has had three more meetings with Mr Obi after the London trip even though has lucidly made it clear that he would not leave the PDP.
As a political historian, I could recall with benefit of hindsight the outcome of the 2019 presidential election which had Alhaji Atiku Abubakar as the PDP’S presidential candidate and president Muhammad Buhari as the candidate for the ruling All Progressives Congress. Buhari defeated Atiku in that election. But a deeper look into the voting pattern in terms of regional inclination showed that Alhaji Atiku had more votes and support base in the south than he had in the North.
Since the return of the Fourth republic in 1999, the south south and the south east has appeared to be more of a PDP state than other parties. Despite the emergence that birthed APC in 2014, those regions showed they were more of a pro PDP region. But with the Crisis rocking the party and Wike insistence of having the national chairman removed, PDP would certainly have a deep cut out of the massive votes it recorded in the previous presidential elections. Besides being a River state governor, Wike has a political weight in the region and his influence as we have now seen transcends the horizon of his state.
Atiku’s PDP has no large acceptance in the northern region of the country based on the Northern perception of his personality. Some elitist groups believe that a Buhari presidency of 8 years should not be succeeded by the same northerner, thereby making Atiku’s candidature a wrong political choice for a party that wants to return back to power. Even though he rarely stays up and lives in Nigeria, an average northerner believes that Alhaji Atiku lives more in foreign countries than the city of his nativity. To them, he is more of a visiting politician and they believe that he’s not part of them to really know the extent of their plights. More worrisome is Shetimma’s factor in the North East, even though the region appears to be Atiku’s  place of birth, Atiku would have a herculean task to convince more voters following the wide acceptance of Senator Kashim Shettima by an average northerner.
With South East largely out of his voting Victory base  due to Mr Peter Obi’s factor and the South South gradually sliding away from his hands due to the crisis rocking the party, the PDP’S presidential candidate has a slim chance of winning the election. Alhaji Atiku may even Battle it out for third position. The north central votes may be shared between the APC, LP and PDP with a fraction of it for NNPP. While the Muslim-Muslim joint ticket  may give a sympathy vote to LP from the Christian community within North Central, and also APC controlled states within the region will have its  leadership ensure victory for their party within the north central. The only PDP controlled state in North Central is Benue and even at that, Governor Samuel Otom is pro Wike and he has consistently said he was still praying to God to know who he will vote for. Atiku’s PDP may need to comfort themselves ahead of the looming defeat, especially that the North Western region of the country would have its votes shared between the APC, PDP, NNPP and LP. It has even been said that Kwankwoso appears more popular in the north Western region than Atiku.
A party that has ruled the country for 16 years should be able to have a workable mechanism on conflict resolution by jettisoning self aggrandizement and put  their house in order if only they are serious about the presidential election because a party that cannot lead itself cannot lead Nigeria.
Dr Ohikere
Writes from Abuja and he
Is the Publisher of APC News Online
16
Share FacebookTwitterWhatsAppEmailTelegram