Ondo Governorship poll: No rift between Akeredolu and me – Tinubu 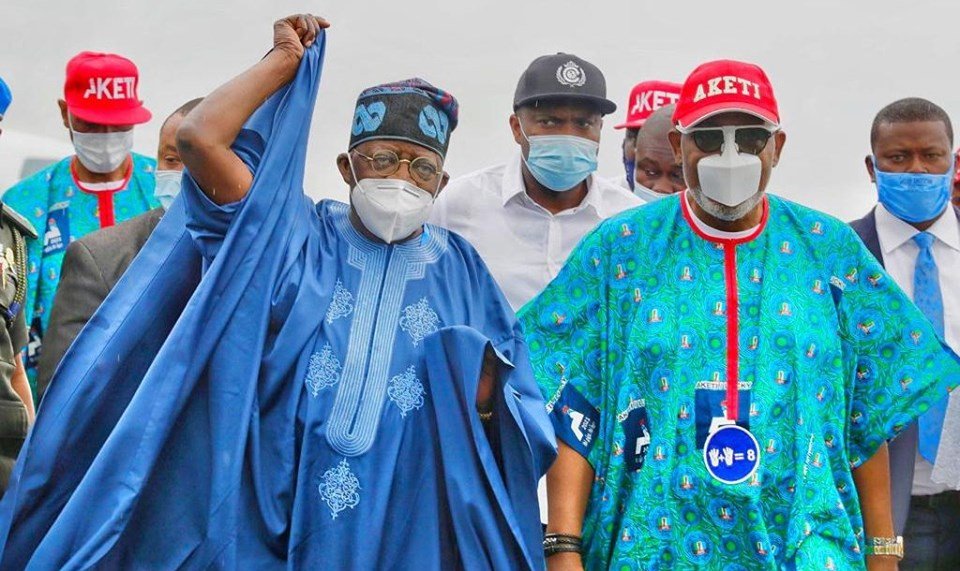 The national leader of the All Progressives Congress, Bola Tinubu, has dismissed insinuations that there is a rift between him and Governor Rotimi Akeredolu of Ondo State.

Speaking during an interactive session with Ondo traditional rulers on Saturday, Mr Tinubu said the state needs the governor to continue his good job so that the people could enjoy more dividends of democracy.

“Don’t listen to them. Some people can go to any length to lie against other people. We are not fighting, Odua people need to be united.

“Our monarchs, your support is needed, though you have assured us that you have agreed to ensure Akeredolu comes back for second term,” he said.

The two politicians have not always seen eye to eye, with the matter getting to a head in 2016 when Mr Akeredolu was elected without the support of Mr Tinubu and his associates.

Although the duo reportedly reconciled in Abuja last year, suggestions of a subtle rift have persisted.

The News Agency of Nigeria NAN reports that the governorship election in the state is scheduled to hold on Oct. 10.

Speaking at the Dome International Event Centre, Akure, Mr Tinubu said people have seen the good things such as roads, agricultural developments, schools, industrial park and other things Mr Akeredolu had done in the state since he came on board.

“We have commissioned the Revenue House today and he has assured us of bringing back the produce marketing board. He has also guaranteed employment for youths across the state.

“Kabiyesis, our schools that you have built and sent us to has brought us where we are today. If we don’t invest in education like Akeredolu has done, our children will lag behind.

“Youths need jobs, our youths who are left at home need to be catered for because we cannot leave them. We want a second term.

“Please, we are here to tell and show that there is no quarrel between children of Oodua. We will not go back to the situation of 1983,” the former governor of Lagos said.

Mr Tinubu, therefore, charged the traditional rulers to speak with their chiefs and subjects to ensure that Akeredolu was re-elected.

Earlier, Frederick Akinruntan, the Olugbo of Ugboland, gave assurance of the support of the traditional rulers for the second term bid of the governor.

According to Mr Akinruntan, what makes the monarchs support Akeredolu’s reelection is the giant strides of his administration since inception.

“The flag-off of the deep seaport, Araromi-Lekki-Ibeju Road, Overhead bridge in Ore, and many roads across the state.

“He also upgraded traditional rulers from grade D to C,” the monarch said.

Also speaking, Mr Akeredolu promised to do more, with the support of the traditional rulers, if he was re-elected for a second term.

The governor, who said the election was for Oodua people, explained that it was the turn for a Yoruba presidency by 2023, hence the importance of APC retaining the seat in Ondo State.

“This progressive party must continue to be in Ondo. What happened in Oyo state must not happen here. Talk to your people because this election is for Oodua people,” he said.

Dignitaries at the event included governors Babajide Sanwoolu of Lagos State, Gboyega Oyetola of Osun, and Yahaya Bello of Kogi; and Bisi Akande, the pioneer national chairman of APC.