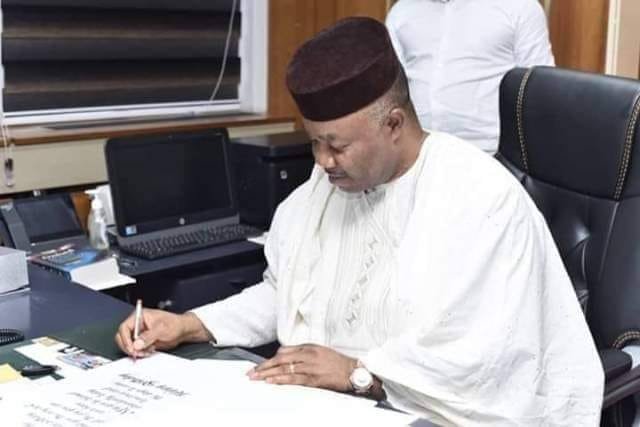 Share FacebookTwitterWhatsAppEmailTelegram
The Federal Executive Council, at its 13th virtual meeting, presided over by President Muhammadu Buhari, approved the appointment of eight field forensic auditors to audit the Niger Delta Development Commission.
The Minister of Niger Delta Affairs, Godswill Akpabio, later told State House reporters that the FEC approved N722.3m for the eight auditors aside from the N318m earlier approved for some lead auditors for a similar job.
He said another batch of about seven or eight forensic auditors would later be engaged so that the field audit would be completed within the next one or two weeks.
Akpabio revealed that Buhari had last year approved an estimated amount of N2.5bn for the forensic audit.
“So, everything we’re spending now will come from that estimated sum. Initially, it should have come from the budget of the NDDC, but because of the delay and the inability to pass the 2020 budget, the entirety of the amount that’ll be spent will come from the budget of the presidency. That’s why there was a delay, but we’re on course right now.”
He said about 12,000 abandoned projects of the NDDC in the last 19 years would be reviewed by the appointed auditors.
Related Posts

Dec 2, 2022
He said the forensic audit was to address the issues of misappropriation, bribery, corruption, and fraud that had militated against the success of the NDDC in the last 19 years.
He said the involvement of international forensic auditors, Ernst and Young, would help to set up modalities to avoid future fraud and governance structure that would move the NDDC forward and bring many more benefits to the people of Niger Delta.
“Earlier, we had the lead forensic auditor that was approved sometime in March and now we have about eight other forensic auditors who have been approved and they’re going to be working in the field in the Niger Delta region.
“One of them is an international group and they will be in charge of programs and activities at the headquarters and the one is Ernst and Young. And so, Council graciously considered the memo and approval was given today.
“This has really kick-started the commencement of evaluation of the abandoned projects of NDDC in the last 19 years estimated almost 12,000 projects. In the end, we’ll be in the position to know the ones that could be completed, the ones that’ll be useful, the low hanging fruits that could be plucked for the benefit of the people of the Niger Delta region and through this exercise, we’ll know the amount of monies that have gone into the region in the last 19 years and whether the value we have received so far are commensurate with the monies that have entered into NDDC,” he also said.
Meanwhile, the Minister of Water Resources, Suleiman Adamu, said the FEC approved N101m for the revised estimated total cost of consultancy services for the ongoing Ogbese Dam Project in Ekiti State.
He said the project, which started in 2009, was awarded in favor of the consultant, Messr. Geomatics Nig. Ltd for an extension period of 24 months.
10
Share FacebookTwitterWhatsAppEmailTelegram