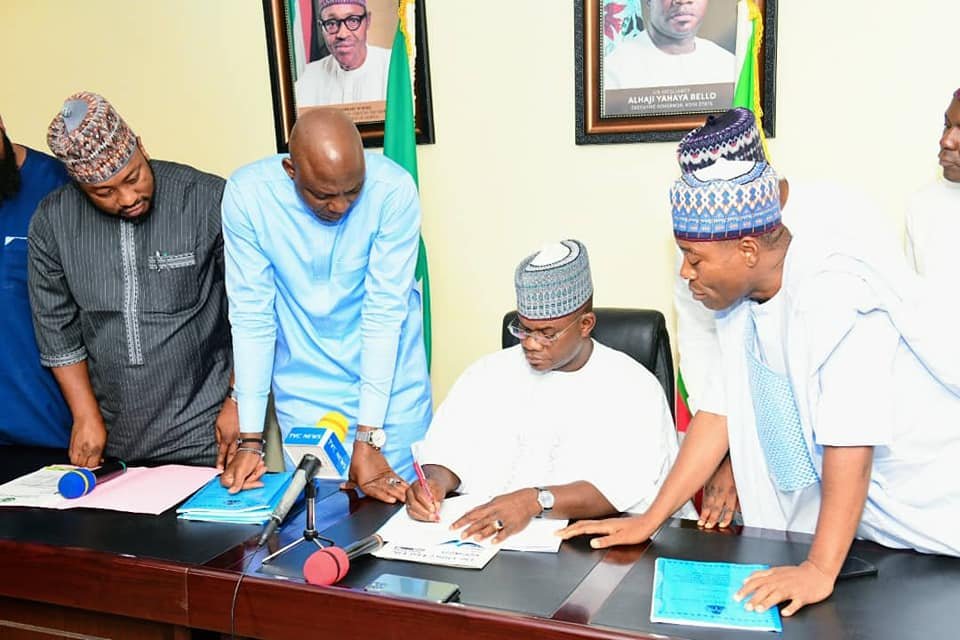 Share FacebookTwitterWhatsAppEmailTelegram
Kogi State Governor Yahaya Bello, on Friday, assented to the bills for the establishment of the Confluence University of Science and Technology, Osara, and the Central Reference Hospital, Okene which were passed by the State House of Assembly respectively.
The Governor while performing this statutory function in his office, said the importance of education and health to the society cannot be overemphasized. He reiterated the fact that the world economy is gravitating from being theoretical based on a more advanced and practical innovative driven style of knowledge acquisition and the university would serve as a specialized one that will provide the much-needed manpower for the ever-increasing industries within and outside the country.
Governor Bello, speaking in his office at the signing ceremony today, made a firm promise by stating that his people-driven administration will devote the much-needed resources, time, and dedication to ensure that the people-oriented project is commissioned before the expiration of his tenure. In the same vein, the Governor also signed the bill for the establishment of Central Reference Hospital Okene as part of his administration’s efforts towards boosting healthcare delivery in the state.
Related Posts

Nov 29, 2022
Governor Bello said that he had earlier signed into law, the Kogi State Health Insurance Scheme which he noted, will guarantee every citizen of the state access to quality health services within the state.
Earlier, the Speaker of the Kogi State House of Assembly, Rt. Hon Mathew Kolawole commenting on the two bills stated that the bills were of immense value to the people of the state. This is not far fetched from the roles a robust educational and public health sector would play in the life of the people.
He commended the governor for assenting to the bills while thanking members of the assembly for meticulously considering the bills for swift passage.
Onogwu Muhammed
Chief Press Secretary to the Governor
25
Share FacebookTwitterWhatsAppEmailTelegram

WADA MAIDA: MENTORSHIP AS A MANTRA