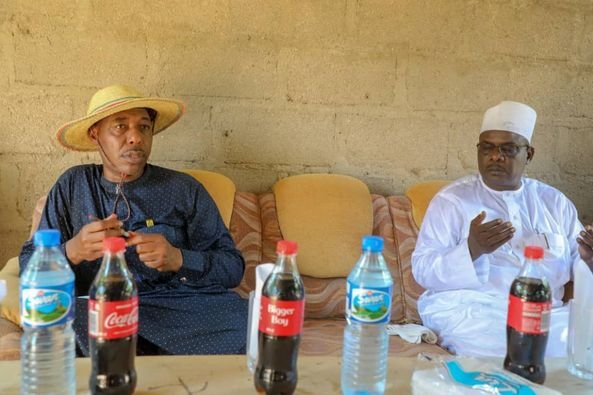 Share FacebookTwitterWhatsAppEmailTelegram
Borno Governor, Babagana Umara Zulum spent the whole of Sunday at Ngoshe, a community in Gowza local government area. He directed the fast completion of 200 low-cost houses for the resettlement of internally displaced persons.
Zulum departed Maiduguri early morning by road to the south-eastern town that is one of Gwoza’s populated areas.
Gwoza as a whole was one of Boko Haram’s stronghold in which Abubakar Shekau, spiritual leader of the terror group, once lived as headquarters, before Nigerian troops liberated the town around 2015.
Governor Zulum has since assuming office undertook at least 10 trips to different parts of Gwoza for humanitarian and development purposes.
Sunday’s trip to Ngoshe was for inspection of ongoing construction works, to assess the needs of some surrounding communities and discuss with resettlement issues with soldiers.
The Governor had a closed-door meeting with officers and men of the Nigerian Army stationed in Ngoshe.
Related Posts

Dec 2, 2022
Zulum, while addressing journalists, assured of speedy completion of resettlement houses so internally displaced persons would return soon.
“We will liaise with the Nigerian military to ensure the safe return of our people. With the ongoing efforts to complete 200 houses, the initial batch of not less than 400 people will eventually be able to return. We will fast track the completion of the Primary health center as well as the Primary School” Zulum said.
The Governor said he was also in Ngoshe to support soldiers and boost their morale.
“My visit here is also to have an interface with the Nigerian military to see how we can support them. Security is a responsibility of all of us, we cannot leave the military alone, the civilians should also play their part”.
Before Sunday’s trip to Ngoshe, Governor Zulum had traveled to Buratai and Biu towns, also in the southern part of the state, where he ordered the construction of two new mega schools and rehabilitation of a primary health center in Buratai town.
He had also inspected road, and drainage works.
21
Share FacebookTwitterWhatsAppEmailTelegram