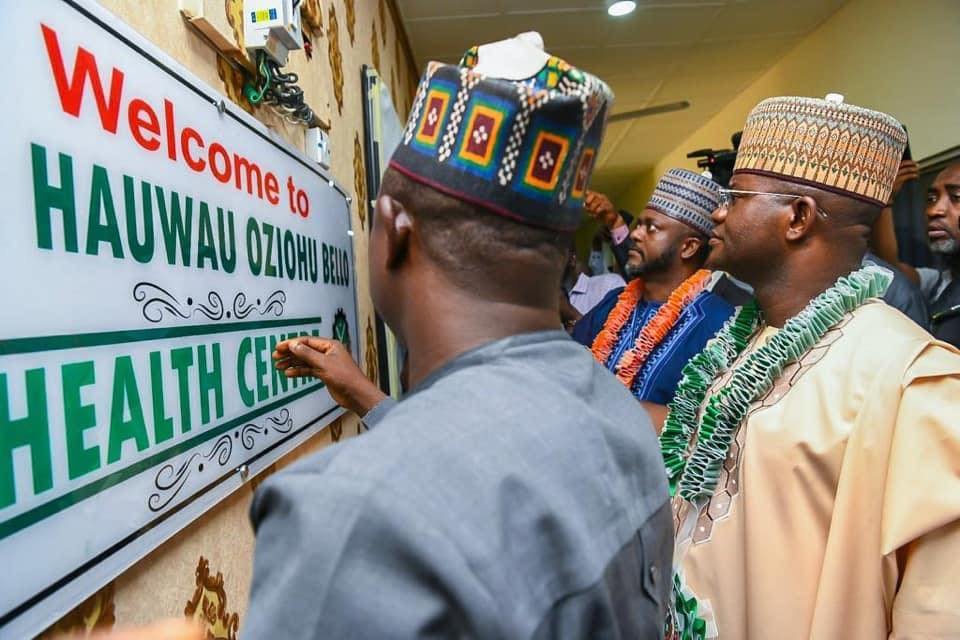 Share FacebookTwitterWhatsAppEmailTelegram
Kogi State Governor, Yahaya Bello on Thursday commissioned a-45 bed space Hajia Hauwa Bello Medical Center, alongside, perimeter fence, security house and a newly renovated lecture theater at the Kogi State Polytechnic, Lokoja.
The Governor who was accompanied by his Deputy, Edward Onoja; Speaker, Kogi State House of Assembly, Mathew Kolawole, and other top government officials, also inspected some of the facilities and equipment on the ground as well as other ongoing projects.
Governor Bello in his remarks lauded the Acting Rector, Dr. Usman Ogbo for his effective and foresight leadership, noting that under straining financial circumstances, he has turned “lemon into lemonade” within his short stay in office.
He pointed out that his administration’s policy thrust of ethnic and social integration created the enabling environment to place round pegs in round holes thereby facilitating productivity and high performance.
The Governor said the Acting Rector’s “can-do spirit” which has brought about the massive pace of development in the institution was also demanded from all other appointees of his administration as his second tenure progresses.
Related Posts

Nov 26, 2022
He asserted that his administration would not tolerate anyone whose interest was to divide the state, noting that unity of purpose was his administration’s ultimate focus.
He said it was never in doubt that his administration accord top priority to education, noting that he recently signed the bill establishing the Confluence University of Science and Technology which he noted would be completed long before the end of his tenure.
The Governor also mentioned the recent upgrade of the College of Education Ochaja to a diploma awarding institution as part of his recent strides in the sector.
The Acting Rector, Dr. Usman Ogbo in his remarks, thanked the governor for the support given to him which has enabled him to achieve some of the modest achievements which were commissioned by the Governor.
He added that the state’s education sector has recorded tremendous growth both in policy direction and infrastructure across the board owing to the resolve of Governor Yahaya Bello to change the existing negative narratives in the sector.
Dr. Ogbo added that the security house newly constructed and well equipped was one of the institution’s efforts aimed at nipping cultism in the bud, assuring of his unrelenting efforts alongside management and staff of the institution to reposition the institution to rank among the best in the country.
14
Share FacebookTwitterWhatsAppEmailTelegram