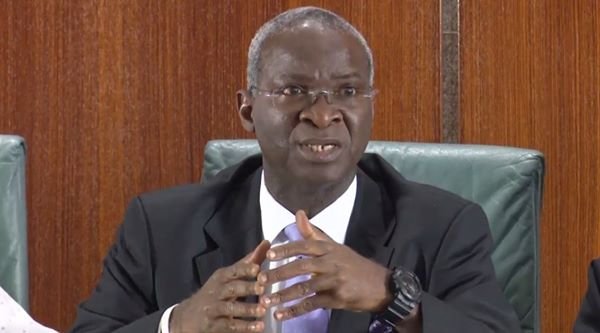 Nov 29, 2022
According to him, local production would also help to maintain quality control on production through the Standard Organization of Nigeria (SON) and related Consumer Protection Agencies to ensure that the right quality of bitumen is produced for use by the construction companies while also ensuring further diversification of the nation’s economy.
Assuring investors wishing to invest in the local production of bitumen of government patronage and encouragement, Fashola said local production would also free the foreign exchange currently being expended on the importation of the commodity for other socio-economic needs of the country.
“It will preserve local jobs and also create thousands more that are currently being created in countries from where we import the commodity”, the Minister said adding that the envisaged employment boost, especially in transportation haulage was in line with the President’s projection of lifting 100 million Nigerians from poverty’ and his mandate, “to use what we produce and produce what we need”.
In order to implement the initiative, he recommended that the Ministry of Petroleum Resources, the Nigerian National Petroleum Corporation (NNPC) and the Kaduna Refinery and Petrochemical Company should come up with strategies and requirements that would enable the KRPC to resume the production of bitumen at its plant.
Assuring the Council that President Buhari has directed the reconstitution of the Bitumen Committee for auctioning off the Bitumen Blocks while the Nigerian Geological Survey Agency (NGSA).is also engaged in the exploration of more blocks, the Minister informed Council with delight that upon reviewing the Memorandum, the Minister of Mines and Steel Development had already given his “No Objection” to the position of the Ministry of Works and Housing on the need for local production of bitumen to reduce the cost of road construction.
Aside bitumen, Fashola also sought the improved local production of other essential road construction materials such as cement, crushed rock, and steel explaining that while cement constitutes the major component of reinforced concrete utilized in the construction of bridges, drains, culverts and rigid pavement, crushed rock is used as the base course to give road pavement the desired load-bearing strength while steel is utilized as reinforcements in the construction of drains, culverts, bridges and other hydraulic structures on roads.
In inviting the Council to approve the Memorandum, the Minister noted that there was a need to encourage local production of essential construction materials in the country to reduce the cost of road construction, create employment and stimulate growth adding that the spiral increase in the cost of construction materials over the years has resulted in the rise of road construction cost and led to repeated requests for augmentation of ongoing contract sums.
He said while efforts were on to revamp the Ajaokuta Steel Complex to achieve full local production, the required quantity of bitumen for construction of roads across the country are being imported because the Kaduna Refinery and Petrochemical Company had stopped the production of bitumen since 2017 adding that road construction utilizes major part of the average 500, 000 metric tonnes of the product made locally when it was still in production.
Stressing the importance of bitumen in road construction, Fashola declared, “Bitumen is used at almost all levels of road construction, from subgrade, sub-base, base course and asphaltic course (Binder and Wearing)”, reiterating that the lack of the product contributes significantly to the high cost of road projects in the country.
Speaking to newsmen later on the approvals, Fashola, who also disclosed government’s intention “to give encouragement and support to all those who take up the opportunity of manufacturing bitumen”, said the Kaduna Refinery and Petrochemical Company was expected to also raise its game by participating in the production sub-sector of hydro-carbon industry, adding, “We expect that it will improve the quality of bitumen that is produced and goes into our road construction just as we are now able to control the quality of cement that goes into local construction”.
“We are also promoting the use of more cement, stones, and rocks in road construction”, the Minister said adding that his Ministry was now developing a design manual of rock and stone used in road construction in the country which, according to him, formed the framework of the policy documentation that he presented to Council and which were approved.
“So, we expect the Nigerian entrepreneurial community to now respond to all of the existing government policies for setting up businesses and embracing this policy as part of ways to develop our made-in-Nigeria capacity”, Fashola said.
HAKEEM BELLO
SPECIAL ADVISER, COMMUNICATIONS
TO THE HON. MINISTER
15
Share FacebookTwitterWhatsAppEmailTelegram