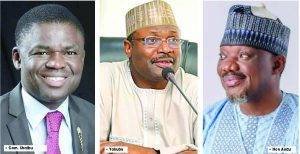 According to the‎ Independent National Electoral Commission (INEC), 14 political parties signified interest to field candidates for the election. But on the ground, only two parties, the All Progressives Congress (APC) and the Peoples Democratic Party (PDP) are visible and campaigning vigorously with their candidates for the election. The others are either issuing statements on social media or have collapsed their structures into the APC or the PDP.

Though governorship elections have held in the state in the past, the Saturday election is different from the past elections in many respects. Never in the history of Edo State has there been an election as contentious as the coming election because of the acrimony and violence that have trailed it.

Consequently, the stakes are very high and the election is going to‎ be tough both in its conduct and management because of the ‘do-or-die’ attitude some party leaders have exhibited in their campaigns and the violence that have engulfed the state generally as a result of the election.

For sure, the election is going to‎ be a straight test of supremacy between the APC and the PDP. Recall that between 1999 and 2008, the PDP held the reigns of power in the state until Comrade Adams Oshiomhole became the governor on November 12, 2008, after his victory at the Court of Appeal.

Since then, power had remained ‎in the hands of the progressives camp from AC to ACN and APC until recently when Governor Godwin Obaseki defected to the PDP, thus ceding to the party the power that had eluded it in the last 12 years.

This current‎ situation is being celebrated by the governors of the South-south region who pride themselves that the region is now entirely controlled by the PDP as was the case before November 2008. They say PDP’s total control has come without electoral contest by virtue of Obaseki bringing Edo State back to the fold.

‎So, in the Saturday election, everything is expected to go into it. The South-south governors will try all they can to support the PDP and Governor Obaseki to win to maintain the status quo, but on the other hand, the APC will seek to prove its dominance and the fact that it is an Edo election where only the Edo people will vote and that has been in charge for 12 years, it will keep what it has.

Just like the PDP governors are throwing their weight, the APC governors are aligning to carry out the directive of President Muhammadu Buhari who is the leader of the party, that they should‎ work hard and leave no stone unturned to deliver Edo and Ondo states to the APC in the elections.

The running mates to both the APC and PDP governorship candidates, Hon. Gani Audu and Comrade Philip Shaibu, are both from Edo North and Etsako West Local Government Area in particular. So also is former Governor Oshiomhole from the same local government.

Edo North has about 350,000 voters. Here, the nomination of Gani Audu, a Muslim, for‎ the first time in the history of defunct Bendel and now Edo State, as running mate, is being celebrated by the Muslim community across the state.

Though the PDP is expected to put up a challenge, opinions indicate that Governor Obaseki and his Deputy, Shaibu, contributed to the humiliation of Oshiomhole, which led to his removal as National Chairman of the APC. The feeling is that the Edo North people have not forgotten the treatment meted to the former governor, so they are determined to use the election as payback time.

In Edo Central Senatorial district, there is a feeling that the area has unjustly been left out of the power loop in the state, that it deserves the governorship of the state. That feeling has led many people from the district to believe in what they call ‘Esan Agenda’ with the assumption that the district’s turn to be governor will be quicker if the people support the PDP with their votes, even though there has not been any categorical promise to that effect from Governor Obaseki that he would hand over to an Esan person should he win the election and finish his second term. Others, however, feel differently on the issue.

The electoral battle is expected to be tough here for the APC because the PDP is known to have its strongest base in the state in the Central Senatorial District, which though, has the lowest votes compared to the other two districts.

The electoral battle between the APC and the PDP will, however, be most fierce in Edo South where the two governorship candidates come from. There are about 1.2 million eligible voters in this Senatorial district.

Opinions here indicate that the PDP and Obaseki may do well in the metropolitan Oredo Local Government where he comes from, Egor and Ikpoba-Okha local governments, while the APC and Pastor Ize-Iyamu look good to dominate in the Senatorial district.

One of the major factors that may swing votes in‎ the election as in other elections in the past is the leadership mobilization of voters. A party with more leaders of influence in their voting units is sure to carry the day. Tied to this is the feeling that state constituencies denied of representation at the state House of Assembly arising from non-inauguration of their elected lawmakers, may use this election as payback time, depending, however, on how effective the constituents are mobilized to vote on the election day.

Another factor that may determine victory in the September 19, governorship election is alignment with the Federal Government. In the 2019 general elections, this factor played out when after voting for the PDP in the National Assembly and Presidential elections but Muhammadu Buhari won notwithstanding, the powers that be in the state quickly returned to the drawing board to impress it on the electorate to vote one way in the remaining House of Assembly election in order to have a ‘cooperative’ House of Assembly to work with Governor Obaseki, who had earlier been elected governor on the platform of the APC and to align with the government at the center in order for Edo State to reap maximum benefit.

Indeed, many benefits have accrued to the state as the only APC state in the South-south as a result of that decision. One of them is that Edo State got a second Minister allotted by the President on the basis of regions.

Now, there is nothing on the ground to suggest that Edo State would want to change its position and be in opposition to the central government in Abuja.

Another point to note is that‎ the Edo State governorship election is a ‘stand-alone election’ and from previous experiences, the APC has not lost such elections and Edo may probably not be different.

Other extraneous factors that are not purely political may uniquely contribute to swing victory in the Edo State governorship election. Those factors are in the realm of respect for traditional institutions and customs of the people.

Overall, the governorship election is expected to be tight and barring any violence that may mar the polls. The APC and PDP look good, it’s a fight to finish.