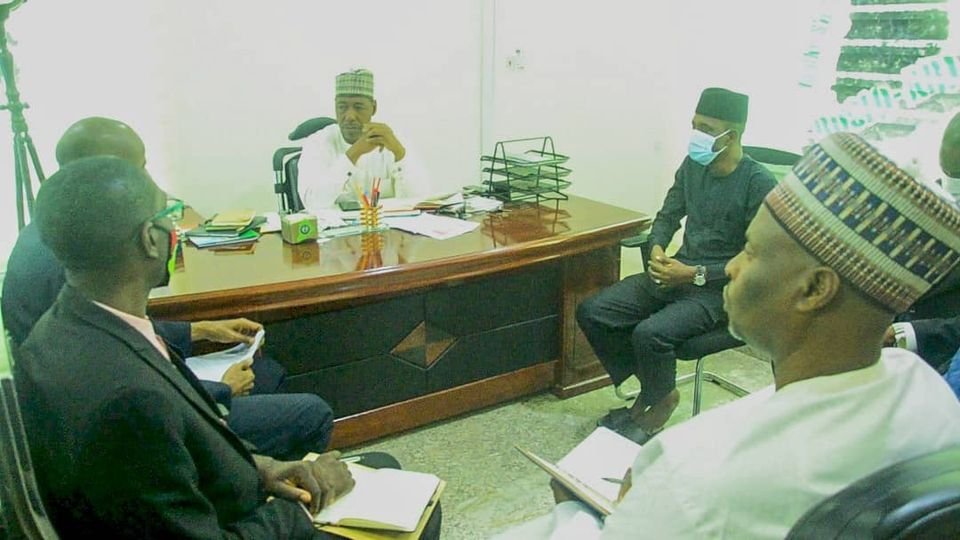 Share FacebookTwitterWhatsAppEmailTelegram
Borno Governor, Professor Babagana Umara Zulum Monday hosted an agro-facilitating team from the Central Bank of Nigeria, with the governor targeting the cultivation of 65,000 hectares of different crops, to begin this year.
The meeting, held at the Borno liaison office complex in Abuja, had in attendance six officials from the Central Bank, led by Mahmood Nyako, a deputy director, whose team included CBN’s head of anchor borrowers, Chika Nwaja, and Mohammed Garba Said who heads the bank’s fish farming intervention program.
Borno’s Commissioner for Agriculture, Engr Bukar, the chairman of Borno’s mega-farms project, Hon. Musa Inuwa Kubo, were on Zulum’s team.
The Governor said Borno was interested in keying into CBN’s anchor borrowers and commercial agriculture programs with the aim of cultivating 30,000 hectares of sesame seeds, 10,000 hectares of maize, 10,000 hectares of sorghum, 15,000 hectares for cultivation of rice, groundnut, and cowpea with each to take 5,000 hectares.
Related Posts

Nov 26, 2022
The cultivation is to take place in farms located in the Borno central, south, and north, in line with the governor’s aggressive efforts to restore agriculture in livelihood protection for internally displaced persons and resettled communities.
… Gov keen on CBN’s fish farming
Governor Babagana Umara Zulum, also at the meeting, indicated a keen interest in Borno taking advantage of CBN’s fish farming intervention.
Teams from Borno government and the CBN are expected to hold another meeting in Maiduguri next week to agree on areas the bank will support “huge investment to create a value chain in fish farming”.
Zulum had identified communities in Borno where citizens engage in fish farming, pointing out that his administration was going to invest in ways the citizens would have an increase in yield for wealth creation and to enhance food sufficiency in the state.
12
Share FacebookTwitterWhatsAppEmailTelegram

Petrol price in Nigeria one of the cheapest in Africa, says FG