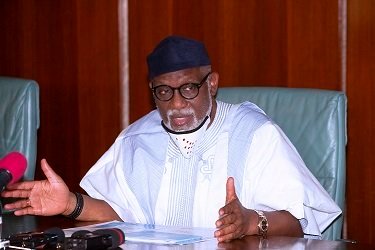 Governor Rotimi Akeredolu led top government functionaries in handing over the remains of the former Governor to Governor Fayemi at Ikere- Ekiti, a border town of the two states.

Present at the brief event were children and family members of the deceased, including Ekiti Commissioner for Information and Values Orientation, Aare Olumuyiwa Olumilua; Commissioner for Special Duties, Alhaji Ayodele Jinadu and other top government officials.

Olumilua, who died on June 4 at 80, was Governor of old Ondo State (comprising the present Ondo and the Ekiti States) between 1992 and 1993.

Fayemi had during a condolence visit to the residence of the deceased, promised to workout modality with Governor Akeredolu to give the former Governor a befitting burial.

Ekiti State Government has scheduled a commendation service in honor of Olumilua for Wednesday in Ado- Ekiti.