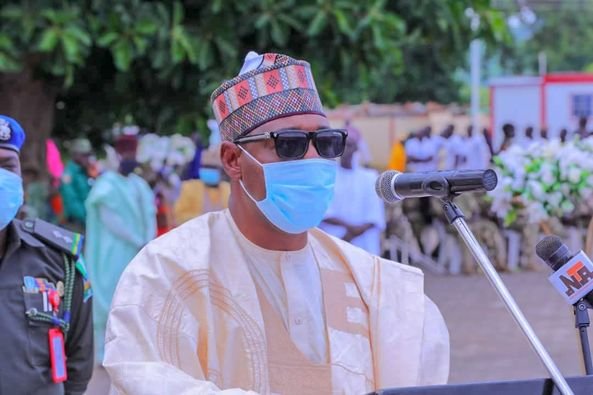 Share FacebookTwitterWhatsAppEmailTelegram
Governor, Babagana Umara Zulum, hosted by the Chief of Army Staff, Lt. General Tukur Yusuf Buratai, on Thursday commissioned an institute of war and peace, located at Buratai town in Biu local government area of southern Borno.
The institute, which is named after the Army Chief, is an off-campus section of the Nigerian Army University which has a campus in Biu town.
The institute was previously the Army’s national museum, established in 2016. The institute has six centers that include: Center for research and documentation, center for counter-terrorism and counter-insurgency, center for strategic communication, cybersecurity center, Museum, and Archives centers.
Speaking at the venue of the commissioning, Governor Zulum expressed appreciation to officers and men of the Nigerian military for their counter-insurgency operations in the northeast.
“I am not unaware of where we were before the inception of the Buratai’s leadership and the successes recorded by the military in the war against terror. We appreciate the sacrifices of lives and deaths of our gallant officers, we shall continue to support our armed forces. When we occasionally criticize we do so with a view to improving on our successes and not out of lack of appreciation.” Zulum said.
Related Posts

Nov 30, 2022
The Governor explained that the Buratai institute of war and peace will promote research on contemporary issues such as terrorism, insurgency, and all forms of conflicts with a view to attaining peace. He pledges his administration’s readiness to partner with the institution.
“This is a very welcome development, I can assure you of the absolute support of the Government and people of Borno State for such a noble venture. We appreciate the foresight of the Nigerian Army University, Biu and indeed the Nigerian Army under the leadership of Lt. General Tukur Yusuf Buratai for this initiative.
Government of Borno State shall work with Tukur Buratai institute to design a templet of programs for peacebuilding, reconstruction and development of our communities. Count on our support.” Zulum said.
He added, “You are all aware of the depleting effect of Boko Haram insurgency in Borno, neighboring States, and indeed adjoining countries of Niger, Chad, and Cameroon. Our dear state, Borno is the worst affected by many of our citizen’s lives in the IDPs camp.
With the level of destruction of infrastructure and displacement of people from their communities, we have the onerous task of rehabilitating the people, so that, they will return to start their means of livelihood. That’s why the Borno State Government is importing a lot of its resources to empower the people and encourage them to return to their communities.
The Nigerian Army has been a reliable partner in this endeavor.”
Meanwhile, Governor Zulum has directed the construction of a new mega school in Buratai town, also ordered by the Governor was the rehabilitation of Primary Health Center, Buratai.
Earlier, the Chief of Army Staff, Lt. General Tukur Yusuf Buratai commended Governor Babagana Umara Zulum, other leaders of the northeast and entire Nigerians for their support to the military.
“I want to thank Nigerians particularly, the leaders, and people of the northeast for their dogged support to the Nigerian Army, without your support and understanding the successes achieved so far would not have been possible, please continue to support the security agencies with timely intelligence as a war on terror is a collective responsibility of all.
I will also like to thank the Governor of Borno State, Prof. Babagana Umara Zulum, the emir of Biu His Royal Highness, Alh. Mai Umar Mustapha Aliyu for their support to the Nigerian Army.” Buratai said.
17
Share FacebookTwitterWhatsAppEmailTelegram