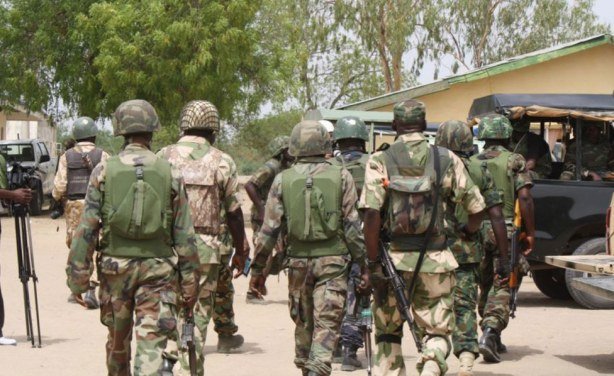 Troops of Operation Sahel Sanity of the Nigerian Army have arrested 418 bandits and 315 illegal miners in the North-West.

The Acting Director, Defence Media Operation, Brig.-Gen. Bernard Onyeuko, stated this while briefing newsmen on the success recorded by the Army Operation at the Special Army Super Camp 4, Faskari, Katsina State, on Saturday.

Onyeuko explained that Operation Sahel Sanity launched by the Chief of Army Staff, Lt. Gen. Tukur Buratai, in July 2020, was to support Operation Hadarin Daji to fight banditry, kidnapping, cattle rustling, arm robbery and all form of criminalities in North-West and some parts of North-Central.

He stated that troops of the Operation Sahel Sanity had recovered 43 Ak-47 rifles, 100 locally made guns, 3,261 live ammunitions and 151 local bullets from bandits across the five states of Katsina, Sokoto, Zamfara, Kaduna and Niger.

He said that from July to date, the troops have neutralised 100 bandits, 20 informants, and six arms dealers that specialised in supplying arms to bandits.

According to him, during the period under review, 81 bandits’ camps were destroyed including that of notorious bandits leader, nick named “Dangote” who was killed on July 24.

Onyeuko announced that a total of 3,984 cattle, 1,627 sheep and goats, and three camels were also recovered from the camps.

He said the animals have been handed over to relevant authority who would return them to their owners.

Onyeuko assured communities in the affected states of the army’s determination to rid the zone of all criminalities, urging them to provide relevant information to security agencies in the ongoing operations. (NAN)