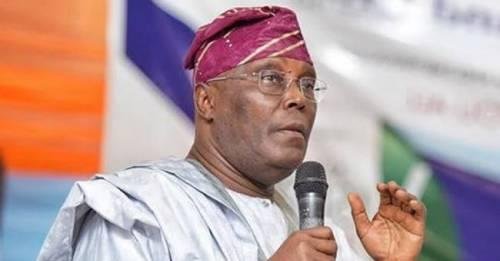 A viral audio shared by Michael Achimugu,a former aide of People’s Democratic Party (PDP) presidential candidate,Atiku Abubakar, has shown the latter relaying how he supervised the establishment of onshore shell businesses to syphon huge amounts of money from contracts involving public welfare contracts for himself and one other.

A story on this,run by Sahara Reporters yesterday (and still running as of press time), alleged that the presidential candidate was “caught on tape admitting his involvement in a complex conspiracy that for years took advantage of federal contracting expenditures.”

The story ran thus:”Atiku also revealed how their government designated some funds stolen during the process to political allies to fund their party’s activities without traces.”

According to Sahara Reporters,he reportedly said:”What happened was when we came into office and I advised the president against open corruption. I told him to ‘give me three people you trust and I will prepare three companies in which they will be subscribers or rather the directors so that if there is any contract that we give,they will act like consultants and they are given a fee. That fee is what we use to fund the party.”

The story further alleged that the former vice president received the name of Otunba Oyewole Fasawe, and two others allegedly to serve as fronts.

The story added: “I now incorporated companies and put them as subscribers. One of the companies was Marine Float.”

The story also alleged that a former governor paid in some money to Marine Float,but that investigations by anti-graft agency, Economic and Financial Crimes Commission (EFCC) failed to link him (Atiku) with the money as the money was with Marine Float instead.

The report equally ran a background to the matter,saying: “In 2007, Nigerian senators accused Atiku Abubakar of diverting more than $100m (£51m) in public funds to private interests.

“A Senate inquiry recommended that Atiku should be prosecuted for syphoning off money to companies he was connected to.

“The Senate launched the investigation after the then-president, Obasanjo, forwarded charges made by Nigeria’s anti-corruption agency against Atiku.

“In a report presented to the Senate, the investigating panel said it agreed with the findings that Atiku helped divert $145m from Nigerian government accounts to banks.

“However, nothing came out of the investigation and findings made.”

Tinubu returns to Nigeria, after Umrah

How Tinubu made mincemeat of Obasanjo in 2003,set for same next month