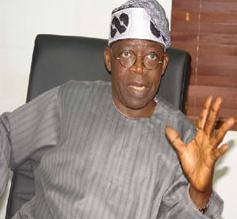 The National Leader of the All Progressives Congress (APC), Asiwaju Bola Tinubu has said the Amotekun security outfit in the South West of Nigeria will be a pet if everyone is engaged.

Tinubu stated this in Akure while inaugurating the Ondo Revenue House constructed by Governor Rotimi Akeredolu of Ondo State on Saturday.

According to him “You can equally use the synergy with the Odua investment to collaborate, not only on Amotekun Corps.

“Amotekun is a creation of necessity to curtail activities of hoodlums caused by unemployment, frustration, and hunger.

“If everybody is engaged, Amotekun will be a pet.”

Tinubu further appealed to governors in the geopolitical zone, particularly as three of them have finance-related backgrounds, to apply synergy used in founding Oodua Investment to address the problems.