Scorecard: What Sadiya Farooq Has Done in One Year 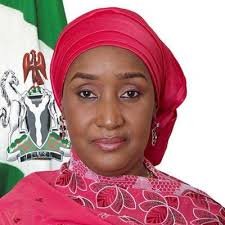 I recall when the president announced the creation of a new ministry known as the Humanitarian Affairs, Disaster Management and Social Development, there was a bit of scepticism in the polity. It was argued in some quarters that the president in creating the new Ministry was duplicating portfolios by creating jobs for the “boys.”

One year down the line, those postulations have indeed been punctured by the superlative performance of the honourable minister, Hajia Sadiya Farouq. This indeed reminds me of the popular saying what a man can do a woman can do better. Hajia Sadiya Farouq did not only surprised many of us with her one-year scorecard, she indeed proved her mettle and justified the confidence reposed in her by President Muhammadu Buhari to head such a sensitive ministry whose activities revolves around the implementation of the social intervention programmes of the government that would have a direct impact on the lives of the ordinary citizens in the country.

I am not just a fan of Hajia Sadiya Faroug; I would call myself an adherent of her infectious mien that speaks volume of a woman on a mission for the betterment of the lives of the ordinary citizens in the country.

She comes across as someone that is very self-aware of herself and others around her. She knows who she is and what she wants, and this much she has exhibited in her duties as the honourable minister of humanitarian affairs, disaster management and social development in Nigeria.

In one year in the saddle, Hajia Sadiya Farouq rose to the occasion in the implementation of various social invention programmes in the country, so much so to the envy and consternation of some individuals and organizations that thought it would be business as usual in running the affairs of the Ministry. But she proved all of them wrong and has continued to forge ahead not mind the scathing attacks on her personality and efforts in the past year.

I make bold to say that she has indeed raised the bar for political appointees in the country. She has displayed uncommon courage in the face of stiff attempts to blackmail her into submitting to the whims and caprices of those groupings that do not wish the country well.

Make no mistakes; this piece is not about her personality alone, but also the lofty heights she attained within one year. It can thus be only imagined what the story would be after four years. Your guess is as good as mine.

I would start with the N-Power initiative, which has generated quite some uproar in the country. What people do not know is that the minister took a very bold step in repositioning the scheme through the introduction of the Batch C stream to accommodate more youths. This is sufficing to state that within 24 hours of the introduction of the Batch C stream, over one million youths made applications. And at the close of the application process, a total of 5,042,001 applications were received from Nigerians. This fact implies that indeed the minister understood the need to expand the net to accommodate more Nigerians in dire need of some form of engagements.

This, in my opinion, is thinking outside the box, which is a necessary skill in governance in modern times that entails questioning the status quo regularly. Make nonconformity the regular conversation, take a broader perspective and oscillate between uncommon content, draw a picture as a team and draw a picture of your challenge and possible ways to solve it.

The above listed are some of the attributes the minister has brought to bear in the discharge of her duties in the past one year in the saddle as the honourable minister of the ministry of humanitarian affairs, disaster management and social development.

It is indeed a one year of service to humanity for Hajia Sadiya Farouq through numerous initiatives that have had far-reaching benefits to the generality of Nigerians directly and indirectly. The intervention of the Ministry during the COVID 19 pandemic is another point of reference. The efforts of the Ministry and Agencies under it have been outstanding. They have been involved in the distribution of different kinds of palliatives to the most vulnerable in the society, which includes refugees and IDP’s, People Living with Disabilities, Older Persons, Trafficked Persons, Orphans, the Poorest of the Poor in Communities, Petty Traders and other Persons of Concern.

The palliatives include foodstuffs like rice, maize millet, sorghum, vegetable oil, tomato paste, milk, sugar and spaghetti. Also, Four months of stipends paid at once to those benefiting from the Conditional Cash Transfer to cushion the effect of COVID 19, Loans and moratorium to trader and market moni beneficiaries, take-home food rations for Households of Children enrolled in the National Home -Grown School Feeding Programme and others too numerous to mention.

Under the supervision of Hajia Sadiya Farouq, the Ministry held the first-ever Civil Security Cooperation Workshop (CISEC) which birthed the Civil Security Coordination Framework out of which the National Humanitarian Coordination Forum was created and inaugurated earlier this year to ensure the smooth conduct of all humanitarian activities in the country.
Other structures include the Humanitarian Policy Dialogue Forum which was established to provide a forum in which the Ministry will interact with all CSO’s and NGOs to give room to interact and review all government policies and humanitarian activities. This is indeed, brilliant.

I dare to say that if all political office holders take a cue from Hajia Sadiya Farouq, Nigeria would indeed be a better place for all because, in this critical point of our existence, there is the urgent need for proactive actions towards addressing the myriads of challenges confronting the country.

I can go on non-stop on the exploits of Hajia Sadiya Farouq in the past one year without abate because her dedication and grasp of issues are indeed commendable and worthy of emulation. I can guess that President Muhammadu Buhari would be most pleased with the conduct of Hajia Sadiya Farouq, which has translated to the successes recorded in the implementation of the social intervention programmes of the government.

Some might want to argue that one year is too short to make an assessment, but I dare say that with the way and manner the minister has carried on, it is evident that Nigerians would see more of proactive measures in governance aimed towards delivering the dividends of democracy for all and sundry. This is my charge to Hajia Sadiya Farouq: she should stay focused and refused to be distracted by the activities of mischief makers that are bent on blackmailing her into submission to their whims and caprices.

It is indeed a statement of the fact that Hajia Sadiya Farouq is the star performer in the cabinet of President Muhammadu Buhari despite the avalanche of attacks on her personality by refusing to play ball and maintain the statuesque where a select group feasted on our commonwealth recklessly.
‘
If not for anything the actions and inactions of Hajia Sadiya Farouq at the helm of affairs of the sensitive Ministry of humanitarian affairs, disaster management and social development give hope to Nigeria that some individuals are passionate about sustainable growth and development in the country.

Hajia Sadiya Farouq leads this pack of dedicated Nigerians that are burning alive with passion for Nigeria. I must not also fail to appreciate President Muhammadu Buhari for the choice of Hajia Sadiya Farouq in the implementation of the social intervention programmes of the government.

It is not yet Uhuru as there a lot that still needs to be done. However, this cannot take away the fact the in the past one year, the scorecard of Hajia Sadiya Farouq has been most brilliant, coupled with the transparent way she has carried on as a minister of the federal republic of Nigeria evident in passion, kindness, creativity and innovation. Indeed the past one year in the activities of the Ministry of humanitarian affairs, disaster management and social development has been phenomenal and worthy of emulation as she remains one of the performing ministers of the federal republic of Nigeria.

Alkali, NEDC and the Footprints of a Patriotic Servant, By Murtala Abubakar

Why Nigerians Deserve An Apology Over APPG Report, By Sarah Adetokunbo