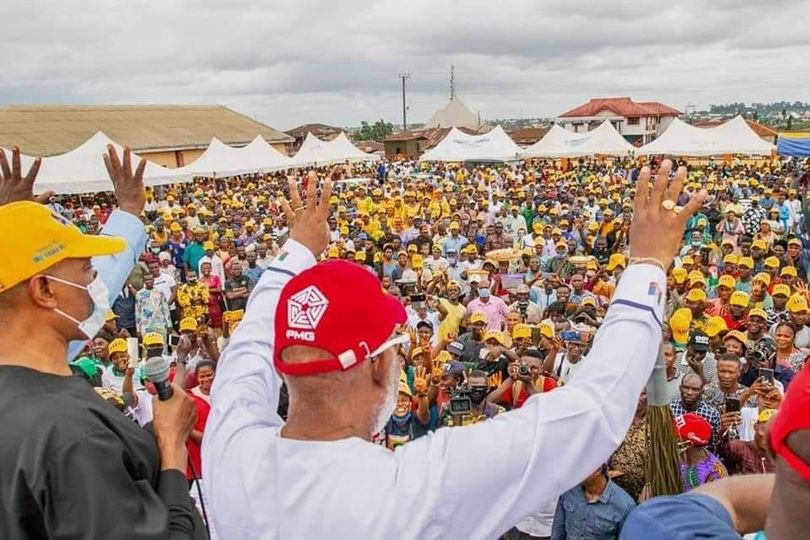 Share FacebookTwitterWhatsAppEmailTelegram
Ahead of the October 10, 2020 governorship election in Ondo State, a Chieftain of the All Progressives Congress (APC) and former gubernatorial aspirant, Chief Olusola Oke SAN has handed over his structures across the eighteen local government areas of the state to Governor Oluwarotimi Akeredolu SAN.
Oke said the re-election of Governor Akeredolu is important for the future of the Ondo South Senatorial district.
The former aspirant assured that the people of Ondo South district will vote overwhelmingly for the re-election of Governor Akeredolu. He said his decision to support Governor Akeredolu was informed by the developmental strides of the Governor in the Southern Senatorial district of the state.
The APC leader stressed that the people of the south will choose for themselves when it is time for the district to produce the Governor of the state.
He said:” If we want a governor in the south, we will choose by ourselves. Not the one that will be picked from the central. We have not chosen anyone to be our governor in the south. No person will choose our Governor for us.
Related Posts

Nov 26, 2022
“We have agreed that Aketi will do the second term. After him, it will come to the south. We will look for a renowned son like Agagu to be our governor. But for October 10 poll, Akeredolu is our candidate and we will vote for him overwhelmingly.
“The renaming of Olusegun Agagu University of Science and Technology (OAUSTECH) after Agagu is enough for me to follow Aketi. We have used our money to train him. He has the experience of governance. We don’t want to experiment.
“That University for eight years after Agagu, was like a goat house. It was abandoned. We know those who abandoned it. Now, they want to choose a governor for us in the south.
“Ondo south will deliver great for you. We want to use our votes to secure our future. We don’t want anyone to contest with us next time. We want to deliver a vote that can’t be challenged in court.
Responding, Governor Akeredolu said it is important for all members of the party to come together to work for the party, saying the APC is now a united big family. Some members of the PDP led by Muyiwa Afolabi joined the APC at the event.
Olabode Richard Olatunde
Spokesperson, Akeredolu/Aiyedatiwa Campaign Organisation
September 2nd, 2020.
17
Share FacebookTwitterWhatsAppEmailTelegram