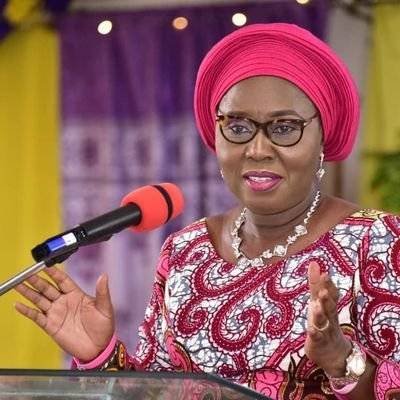 The Wife of Ondo State Governor, Mrs. Betty Akeredolu, on Saturday received many new persons who pledged allegiance to the All Progressives Congress (APC), in Oniparaga Ward 9 in Odigbo local government area of the state.

The new members, who hitherto belonged to six political parties, according to the governor’s wife will boost the re-election bid of Governor Rotimi Akeredolu.

Mrs. Akeredolu, who received them under the platform of Non-Indigene Coalition at Oniparaga town hall, said the first four years of Gov. Akeredolu attracted numerous achievements.

She said that the achievements were in infrastructural development, worker’s welfare, and creating an enabling environment for businesses to thrive.

“In the past, non-indigenes always complained of negligence and marginalization.”

“But the present administration under the leadership of Governor Rotimi Akeredolu accommodates non-indigene by giving them appointments for an equitable sense of belonging.”

“I am one of you, a non-indigene, but became an indigene by marriage. So, this is a very strong message here, a demonstration that non-indigenes in Ondo state matter a lot, especially in the election process.”

“We want your vote for Gov. Akeredolu and I can assure both the new members and everyone here that you will not regret it.

“Recently, we initiated the first of its kind registration of non-indigenes online that will capture the real figure.

“This will help us to identify whatever challenge they feel the government can be of assistance to improve their lives,” she said.

The wife of the governor commended them for choosing the right path of progressive government in the state and assured them that everyone would benefit as it was an all-inclusive government.

A prominent member of the Peoples Democratic Party (PDP), in Oniparaga Ward 9, Mr. Chika Eze, was said to have cross carpeted to APC with no fewer than 300 followers and were received by Mrs. Akeredolu.

Eze said that they decided to join the APC because of the numerous achievements of Gov. Akeredolu in the last four years.

“We hereby throw our weight behind Gov. Akeredolu in making sure that the good works he started continue by contributing our quota to his re-election into the office for a second time,” Eze said.

Mr. Nweke Emmanuel from Action Democratic Party (ADP), said that he led others to join the progressive family with a view to moving the state forward.

Nigerians Expect Obasanjo To Behave Like A Statesman – BMO