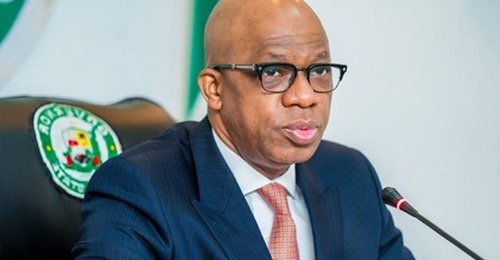 The organised labour in Ogun State on Wednesday gave the  State Governor, Dapo Abiodun, a 14-day ultimatum over the non-payment of the negotiated new minimum wage.

Rising from an emergency meeting of the State Organised Labour held at the Nigeria Labour Congress’  State Secretariat, Abeokuta, the labour leaders, threatened industrial action if the governor failed to address the issues within the period given.

The union lamented over what it called the dysfunctional Contributory Pension Scheme, totalling 134 months deducted from workers’ salaries and unremitted; non-promotion of staff since 2018 and unpaid leave allowances to all employees, both of the State and of the Local Governments since 2015.

This  was contained in a letter addressed to the governor titled “Declaration of Trade Dispute.”

The letter dated September 2, was jointly signed by the State Chairman of the Nigerian Labour Congress, Bankole Emmanuel; the Vice Chairman of Trade Union Congress, Akeem Lasisi; the Chairman and the Secretary of Joint Negotiation Council, Folorunso Olarewaju and Adebiyi Olusegun respectively.

Other issues by the labour leaders are, non-restoration of payment of gross salary and the zero remittance of the National Housing Fund deductions to the Federal Mortgage Bank.

The union which accused the government of insincerity to its commitment described the issues as “recurring and over – flogged”.

The statement reads, “It is quite obvious that the State government has chosen to situate the welfare of its employees to the sphere of afterthoughts. Nothing could capture this our stance better than the deliberate distancing of policies that clearly would have improved workers lot. Viewed dispassionately, we hold the belief that the State government has no clear cut roadmap for solving any issue (s) or matter (s) that bother (s) on its personnel welfare.

“We, therefore, request of the State government to, without further delay, set the machinery in motion to address all of the items within fourteen (14) days from the date above failing which the State Organised Labour will call out its members for full industrial action. The State Organised Labour has demonstrated enough maturity and respect to the development and growth of the state. It is now the turn of the State government to reciprocate.”

In his reaction, the Special Adviser to the governor on Public Communications, Remmy Hazzan expressed the government’s commitment to paying the minimum wage.

Hazzan said, “The issue of the new minimum wage is not contentious, it’s been agreed and the state government has said that it is already committed to paying on that date.

“We as a state are committed to any promise we have made in every single sector including the welfare of the workers. We are not a government of empty promises and I doubt it that the workers said that.”