Information Commissioners Of APC States Converge On Lokoja, Map Out Plans For 2023 Polls 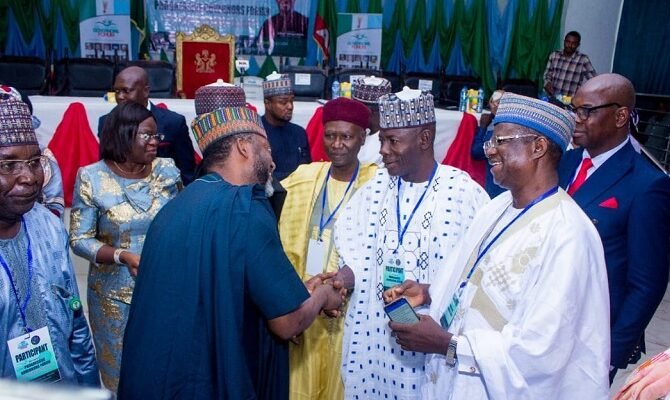 Commissioners of Information from All Progressives Congress (APC) controlled states on Thursday met in Lokoja, Kogi state capital, to finalize strategies for supporting presidential and governorship candidates of the party in the 2023 electioneering campaign.

“It is also meant to ensure those legacies of our progressive governors are made easily accessible globally for future references.

“We have developed an implementation strategy for the LD&P and this meeting would further review it so we can start off full implementation as soon as possible.

Aluko added that the meeting will design media strategies for supporting the governorship and presidential candidates of APC in the 2023 electioneering campaigns.

“Our hope is that the APC will consolidate on its status, not only winning the presidency again, but also bringing more states into the progressive forum, at least 30 states.”

Earlier, the Kogi State Commissioner for Information and Communication, Hon. Kingsley Fanwo said the meeting would discuss on the implementation of the legacy documentation and preservation program, aimed at preserving the legacies of the Progressive Governors.

Bello said he has been able to conquer insecurity, crime and criminality that has hitherto been the trade mark of the state.

The Governor who was represented by his Deputy, Chief Edward Onoja, disclosed that the determination of Gov. Bello to eradicate all forms of criminalities in the state, informed the national and numerous international awards won by the Governor on security, with the recent one being presented by President Muhammadu Buhari.

The Governor further stated that his administration was able to achieve the most secure state status through the making of the traditional rulers and all critical stakeholders who are part of the security architecture of the state.

He added that upon assumption of office, education and health was his major priority which informed the establishment of the Confluence University of Science and Technology Osara.

He said, although the state was experiencing financial challenges, his commitment to quality education and healthcare delivery was the motivation for the early take-off of the institution.

The Governor posited that his administration did not allow the negative impact of COVID-19 to weigh the State down, as he was able to build seven world-class health facilities spread across the State.

He asserted that the recently built and equipped Okene reference Hospital has become the best Hospital in Northern Nigeria.

A Vote For Tinubu/Shettima Is A Vote For Bold And Right Leadership, Says Tolu Bankole

Get ready to be President, Adamu tells Tinubu