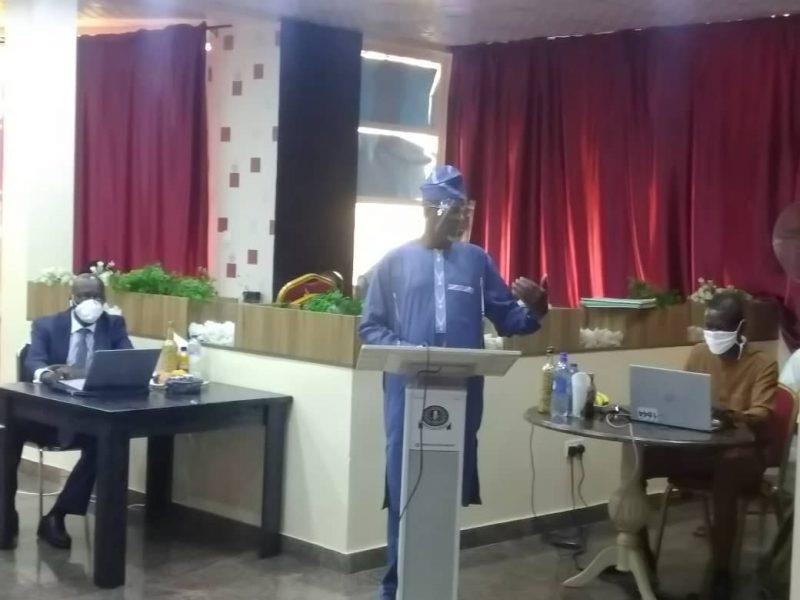 Is washing the hand with water and soap better than using hand sanitizers and gels? How safe and effective are disinfectant tunnels?

These were some interesting questions that sprung heated arguments during the virtual colloquium aimed at debating divergent opinions on measures adopted by relevant authorities to curb the spread of coronavirus in Nigeria.

The colloquium, organized by the Joint Admissions and Matriculation Board (JAMB), in collaboration with the Nigerian Defense Academy and PREMIUM TIMES, was partly held virtually and physically on Tuesday.

While some attendees joined via Zoom, a virtual meeting platform, others were physically present at the JAMB head office in Abuja from where the event was beamed live.

Presenters and participants discussed several questions on what Nigeria should locally adapt as best preventive measures against the spread of the coronavirus.

Here are five takeaways from the event:

How safe and effective are disinfectant tunnels?

One contentious issue that generated heated debate and pitched government officials and health experts against each other is the use of body disinfectants.

Disinfection tunnels that many countries, including Nigeria, are setting up to spray disinfectant on people as they enter certain premises have become a common sight in the COVID-19 era.

The idea is for people to walk through these tunnels or chambers and be disinfected to reduce the risk of them spreading COVID-19.

However, some experts say these tunnels do not help curb the spread of the virus and could also harm the people using them.

“Disinfectant booths have become a common sight in public buildings, whereby chemical is sprayed or showered on human skin each time one passes through the booth. The use of body disinfectant booths and tunnels have been supported, as there have been vociferous arguments against them by different professional individuals and bodies,” Is-haq Oloyede, the JAMB registrar, said in his opening remark, .

“Recently, while the Federal Ministry of Education has persuaded educational institutions to install body disinfectant tunnels as government looks at the possibility of the full resumption of schools, the Ministry of Aviation, following the resumption of flights, has however dissuaded the use of the same disinfectant tunnels at the nation’s airports.”

While Aliyu Sani, coordinator of the Presidential Task Force on COVID-19 argued against the application citing health safety, some other government officials saw no problem with the use of body disinfectants.

Mr Aliyu, a former director of Nigeria’s agency for the control of Aids (NACA) said a walk-through disinfectant such as booths, boxes, chambers, or tunnels, is not so effective in curbing the spread of COVID-19.

He said the duration of between 20 and 30 seconds would not be enough to disinfect effectively. However, the chemical components of these disinfectants sprayed on humans including on vital parts such as eyes, ears, mouths, and noses should raise concerns.

The official said common sanitation is better than using those chemicals.

“Instead of using these spray chemicals that its components are generating debates on its effect on human health, it’s better and safer we use common sanitary products recommended by the WHO,” he said.

A participant, Ezekiel from Niger Delta University, spoke against the use of disinfectant tunnels. He said such chemicals used have not yet been studied and their impact on human health is yet to be determined.

But Mohammed Haruna, head of the National Agency for Science and Engineering Infrastructure (NASENI) believes otherwise.

He said the adoption of disinfection tunnels for preventing COVID-19 is necessary.

He said the measure was first started in Wuhan, China, the birthplace of the virus, and was very pivotal in the success recorded by the Asian country against the contagion.

The official said the use of disinfectant and fumigation is one of the main measures used in flattening the curve in China where it was first adopted.

Mr Haruna said disinfection tunnels do not cure the disease but they are very useful in preventing the disease.

“Prevention is better than cure,” he said.

He said it was on May 15 when the WHO issued a guideline that the debate and doubts on disinfectant booths started.

The official said the WHO guideline did not say that the use of disinfectant booths was ineffective, but it was more concerned with the toxicity of chemicals used.

“The NCDC does not allow the spraying of humans. It’s wrong to discard the use of disinfection completely.”

He said it is very important to use disinfection booths because the tunnels are multi-purposeful; they check the temperature as well as disinfect.

While no common ground was reached on this debate, participants agreed that measures being taken in preventing COVID-19 are still evolving and should be applied with caution.

Soap and Water vs Hand Sanitizers

“Wash your hands always” is one of the most reechoed prevention messages throughout the coronavirus pandemic era. However, how long, how well, and what to be used for handwashing has been a subject of debate.

“Meanwhile, what is the effect of too much sanitizer (another chemical) on the hand? As we are advised to use this chemical frequently”, he queried.

He also said some argue that it is dangerous to use hand sanitizers too much.

Several health experts and researchers believe soap and water are our best defence against diseases even though hand sanitizers became the more priced commodity amid the coronavirus outbreak.

The popularity of hand gels has not just been driven by the fear of pandemics. Lucrative opportunities to market them have pushed sales.

Mr Sani, the PTF coordinator, said soap and water are far better than using hand sanitizers because “hand washing with soap employs mechanical action that loosens bacteria and viruses from the skin, rinsing them into the drain.”

He said hand sanitizers are best used in emergency situations when water, soap, and sink are not readily available.

The Nigerian Center for Disease Control (NCDC) recommended washing of hands for 20 seconds. The World Health Organization says hand-washing should take 40 to 60 seconds. Who is right? Which is to be localized in Nigeria?

This was yet another contentious issue at the colloquium.

In his reaction, Mr Aliyu said it is best to wash our hands for as long and as often as possible.

There were contentions over the use of face masks and face shields.

The PTF boss said using a face mask is the best practice regardless of the contentions.

Face shields may be easier to clean than cloth masks and could be more comfortable, but experts believe they are likely not sufficient because the coronavirus spreads through microscopic respiratory droplets that can easily get around the open sides.

But Mr Haruna, head of NASENI, said there are no measures that have been generally accepted.

“In the US, they said it’s not necessary to wear masks, later they said its only medical face masks should be used,” he said.

The president of the Nigerian Academy of Science, Sunday Bwala, who was a co-moderator of the event, said even if there are lapses in the national responses, it behooves on “us as Nigerians to take precaution seriously and make personal decisions on how to protect ourselves from getting infected.”

Frank Egbokhare, his co-moderator, said it is necessary to follow the science in the fight against the disease.

The moderator said Nigeria has not done enough in awareness creation, and in disseminating the right information about the virus.

“What has spread more is fear, misinformation, and anxiety. Until we strengthen the appropriate communication channels, it will be difficult to follow the science,” he said.

Addressing journalists at the end of the colloquium, Mr Oloyede, the JAMB registrar, said the board decided to organize the event to allay doubts and fears as it prepares its centres for its annual examination.

How we plan to lift 100m Nigerians out of poverty – FG