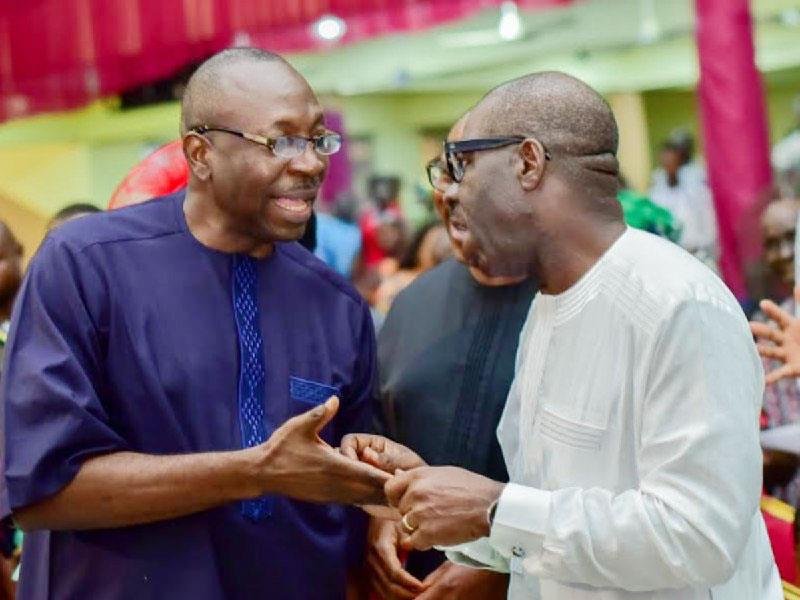 Chuks Okocha in Abuja and Adibe Emenyonu in Benin City

As campaigning for the Edo State governorship election hits the home stretch, the two main contenders have upped the ante in their war of words with each other, by underlining their motivations and stating why the other party may be dangerous for the state. The contest has been something of a grudge match after the incumbent governor, Mr. Godwin Obaseki, defected from the All Progressives Congress (APC) in June to become the candidate of the Peoples Democratic Party (PDP) and square up to the APC nominee, Pastor Osagie Ize-Iyamu.

The dramatis personae are not about to yield an inch as they intensify campaign, trade accusations and counter-accusations in what is bound to a defining election in the state.

In two separate interviews with THISDAY, Ize-Iyamu and Obaseki took a swipe at each other, in an effort to play up their strengths.

But the leaderships of PDP and APC, yesterday, commended His Royal Majesty, the Oba of Benin, Omo N’Edo Uku Akpolokpolo, Oba Ewuare II, for stepping in to calm the increasingly political atmosphere in the state ahead of the September 19 governorship poll. The Edo paramount ruler had recently invited all the interested parties to a roundtable, where he supervised what many considered a forced truce.

Speaking on a cocktail of issues pertaining to the election, Ize-Iyamu contended, in the chat with THISDAY, that the verdict in the state today was that the incumbent governor had failed in all the critical parameters of governance and the people would rather try a different hand.

The APC candidate stated, “The truth, as the data from the complaints of our people have shown, is that the last four years have been really bad for our state. We have seen a government completely distracted by needless wars of self-aggrandisement and a complete lack of administrative control, which resulted in endless internal squabbles between aides, many of whom lost faith in the governor and his style of leadership. All of these depleted state resources, oftentimes through questionable means, and took a great toll on governance.

“Not a single teacher was hired in four years, despite the fact that schools in our rural communities suffer acute shortage of teachers and other personnel. A government that failed to prioritise the education of our children, particularly at the primary level, the bedrock and foundation of all other levels of learning, has failed in its mandate and betrayed the trust of the people. There are no ifs and buts.

“As you must already be aware, the word ‘SIMPLE’ in my manifesto is an acronym for Security and Social Welfare, Infrastructural Development and Urban Renewal, Manpower Development and Training, Public-Private Partnership, Leadership by Example, and Employment creation and social empowerment scheme.

“I have outlined specific plans and programmes to engender progress in all these critical areas and replace the inertia of the last four years with real growth and development.”

Addressing the security situation in the state, which he claimed was deeply concerning, Ize-Iyamu said, “Violent crimes are on the rise. There is almost an unchecked spate of kidnapping. Our people in rural and urban communities no longer feel safe in their homes.

“As you know, security and welfare is the primary responsibility of government, because people have to be alive and well to enjoy other policies and programmes of government. A secure environment is also key to commerce and the attraction of investments.”

Ize-Iyamu also spoke on what his government would look like.

“From day one, my administration will commence steps to rebuild the state’s security infrastructure,” he stated, adding, “We have identified some low hanging fruits that can yield immediate results.

“For instance, the incumbent government raised security vote to an estimate of over N700 million monthly, but, sadly, hands only N5 million to the Police, as support fund for their operations in the state. Evidently, this is a drop too tiny in a mighty ocean.

“This is something my administration will immediately scale up significantly. Apart from this, we are also going to explore other areas of sustainable funding for the Police and other security agencies in Edo State to strengthen patrol, surveillance and other crime prevention measures.”

But in yet a different interview, Obaseki dismissed the assertions of his opponent, insisting that he not only maintains 70 per cent positive rating, but also over 80 per cent of the electorate are with him.

The governor said, “I know THISDAY has an Intelligence Team. You can send them to the field to collect data on how the people feel about my team and I. I am certain you will get the verdict that the people love all we have done for them. We have a 70 per cent positive rating.

“The people know that we are serving them. We are humane and have a human face. We have liberated them from thugs, oppressive extortionists and others, who used to prey on the people. It is these few people – these oppressors – who we have freed our people from that are complaining.”

Dismissing insinuations that he had lost touch with the people, Obaseki said, “This is absolutely false. Like I always say, you don’t have to take my word for it. If your paper should send men for an independent and unbiased survey, you will find out that we have 80 per cent of the voters and the people committed to my re-election.

“We also have a groundswell of support from Edo people in the Diaspora, both within Nigeria and outside the country. Therefore, it is in my best interest that the process is peaceful and calm, so all these people can go out, exercise their franchise, and re-elect me.

“On the contrary, it is the APC who know for a fact that they don’t control up to 20 per cent of the electorate in the state and are heading for certain defeat that is stoking violence, causing chaos, attacking innocent citizens, residents and members of the PDP. They are also planning other underhand, illegal, criminal and undemocratic tactics to derail the process.”

Meanwhile, the PDP National Campaign Council for Edo State governorship election commended the Oba of Benin for his fatherly intervention to ensure a peaceful and credible governorship election in the state. The council promised to play by the rules. Secretary, Publicity Sub-Committee of the PDP National Campaign Council, Kola Ologbondiyan, said, “Our campaign as well as our teeming members and supporters across the state assure that as a law-abiding and well-known peaceful political party, we had always and will continue to conduct our activities and campaign in very peaceful and orderly manner, which has endeared us to the majority of the Edo people.

“Indeed, our campaign and party members tremendously value the forthright admonitions, reprimands, counsel and direction by the royal father, which is a reinforcement of our party’s established and unwavering commitment towards peaceful electoral process, particularly in the Edo State governorship election, despite the provocations and unwarranted attacks.”

PDP said it was elated by the charge on credible and issue-based campaign, guided by manifestos and geared towards the development of the state. It added that the party was happy because such had been the fulcrum and mainstay of its campaign.

Ologbondiyan stated, “Ours has been a campaign established on the personal integrity and sterling performance of our candidate, Governor Godwin Obaseki, particularly his development programmes and projects in all critical sectors across the nooks and crannies of Edo State, for which the people are eager to re-elect him as their governor.”

According to him, with the support for its candidate across the state, in addition to the fact that Edo has always been home to the PDP, the candidate does not have need for any underhand measure or resort to violence in this election.
The PDP spokesman explained, “This is why our candidate, the performing governor of Edo State, Governor Godwin Obaseki, and his deputy, Philip Shuaibu, have continued to receive rousing solidarity from all the segments of the voting population across Edo State, and the tide of the election is clear to all.”

The party’s national campaign said, “We also urge all stakeholders to allow their actions to be guided by the admonitions of the Oba of Benin as well as other royal fathers in the state, before, during and after the election.”

The Edo State chapter of APC also hailed the Oba of Benin for his peace moves ahead of the election, saying his royal intervention has cooled the Edo political temperature. APC maintained that the revered Oba’s pep talk underscored the party’s stand all along that violence has no place in the civilised electioneering of selling programmes and ideas. It added that a popular party and candidate had no cause to resort to violence.

A statement by National Vice Chairman of the APC governorship campaign, Hon. Patrick Obahiagbon, the said, “Yet again, we the Edo, should all be proud that in Oba Ewuare, we have a wise, polished, accomplished, visionary and leader, who can counsel his subjects with royal firmness, from the patrician to the pauper; and earn the respect of them all.”

While praying for a long reign, more wisdom, and good health for the foremost monarch, APC stated, “As long as our revered Oba lives, we know Edo will never go to seeds. That is why we pray, and will continue to pray, for his long, long reign.”
The APC campaign alleged that from the interaction with the Oba, it was clear where the violence was coming from. It said the party hoped the other side would take the Oba’s wise counsel, drop violence and thuggery, and embrace peaceful electioneering, where both sides could freely sell their ideas.

Obahiagbon said, “We have said it before and we are saying it again, we condemn any iota of violence on the campaign stump. We, the Edo APC, absolutely don’t need it. Our candidate, Pastor Osagie Ize-Iyamu, is popular.

“His programmes, presented as the SIMPLE agenda, resonate with the masses of Edo people. To crown it all, our APC is a mass movement, entrenched throughout the length and breadth of Edo State. Why should we then visit violence on our own people?”
APC counselled the Edo PDP and Obaseki on peace, stressing that there is life after elections.

The party stated, “We advise Governor Obaseki to solemnly ponder the Oba’s advice to think of life after office, since he wouldn’t be governor forever. We also call on Deputy Governor Philip Shaibu to honour his pledge to the Oba, to tell his armed thugs to ‘take it easy.’ That done, we can go out and freely campaign to the Edo people on ideas and programmes.

“Let’s all go out and sell our ideas. Violence helps nobody. Let the party with better and superior programmes win, and from what we have done on the campaign trail so far, the better side will be us on September 19. On that day, Pastor Ize-Iyamu will sweep the polls, not because of the rippling muscles of gun-toting thugs but because of the cutting edge of his ideas.”