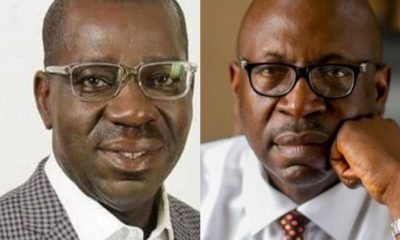 As the candidates intensify campaigns at the grassroots, ‘Dare Odufowokan, Assistant Editor, reports on the chances of PDP’s Governor Godwin Obaseki, and APC’s Osagie Ize-Iyamu, in the Edo State governorship election.

Going by the current voters’ registers in the state, a little less than two million eligible voters are expected to file out next month to decide who will govern the state after November 12, 2020, when the current four-year term of Governor Godwin Obaseki will end. But not a few observers of the politics of the state have given the election away as a straight contest between the two frontline political parties, the All Progressives Congress (APC) and the Peoples Democratic Party (PDP). While Governor Godwin Obaseki is the candidate of the PDP, Pastor Osagie Ize-Iyamu is running on the platform of the APC.

Bright Idemudia is the Chairman of the Coalition of Local Election Observers (COLEO) and a pro-democracy activist. According to him, the September governorship race is definitely for either APC or PDP to win. “Though we have 14 political parties cleared for the election, I can tell you the race is just a two-horse race between APC and PDP. Look around you all over Edo and you will see that the voters have not really been presented with more alternatives. For reasons the other parties will have to explain to us all, they have left the entire space for the candidates of the two leading political parties,” he lamented.

“If the two leading candidates are sure that the voters have alternatives to either of them, they will spend more time discussing issues and convincing the people of Edo State than fighting. But the sad reality is that besides APC and PDP in Edo State, in the last 12 years, there appears to be no other serious political party,” Idemudia added.

The governorship contest in Edo State in September, aside from being a rematch between two familiar combatants, also features a queer swapping of roles. The incumbent governor, Obaseki will on September 19, for the second time, be contesting against the man he defeated in 2016, Ize-Iyamu. But this time, the duo have exchanged platforms, with Obaseki, the incumbent governor, who got elected in 2016 as the candidate of the APC, now the PDP flag-bearer while Ize-Iyamu who ran on the platform of the PDP four years ago has parted ways with his former party and is today the candidate of APC.

Ironically, in their first contest in 2016, the then Governor Adams Oshiomhole, was the major force behind Obaseki against Ize-Iyamu. Before, during, and after the 2016 election, Oshiomhole mounted a fierce resistance against Ize-iyamu’s ambition as he toiled vigorously to ensure the eventual victory of Obaseki, his anointed successor. Today, the situation has changed completely, as the immediate past National Chairman of the APC is now the major force behind Ize-Iyamu against Obaseki. And he has not left anybody in doubt of his determination to unseat his erstwhile political protégée.

Similarly, Oshiomhole and Orbih are working hard to explain why they are today supporting the very same candidates they warned the people not to vote four years ago. Of course, both, like politicians, have been offering various reasons.

“But without doubt, some of these developments will impact on the voting pattern of the people. Already, we have been seeing a lot of cross-carpeting between the two parties, occasioned by the swap.

Several factors are expected to determine where the pendulum will swing. For instance, some pundits say Obaseki, as a seating governor, will benefit from the incumbency factor. To his supporters, he has done enough for him to be re-elected. These may count for him and impact positively on his ambition. Obaseki’s achievements, according to those supporting his re-election, set him apart as the favored choice in the governorship race. But those opposed to his re-election insist he has not done enough to get another term of four years after the expiration of his current term in office.

His Royal Majesty, Mufutairu Iyoha Oare, the traditional ruler of Anwain in Etsako Central Local Government Area has stated that Obaseki’s performance will earn him his re-election. “We don’t need to pray for you. Your impressive performance has already done the prayers,” he said.

But the Ojirua of Irrua, Williams Okuagban Momodu II, says for him, it is Ize-Iyamu. The traditional ruler said this recently while receiving Ize-Iyamu, in his palace. “I welcome you, my governor. Your visit here is just to further familiarise yourself with our people as have already been chosen. Not too long ago, I watched on television as the President handed over the party’s flag to you. I wasn’t there but what I did in my room was to clap my hands. This is our son. He is going to be the next governor. I am the owner of Esan land. I will be celebrating 50 years on the throne next year June; I am sure this governor, Pastor Ize-Iyamu, is going to be my chairman”, the traditional ruler said.

Comparing the chances of the two political parties alongside the candidates, former deputy governor, Rev. Peter Obadan, said the governorship candidate of the APC, Ize-Iyamu, will be elected on September 19, based on the popularity of the party and the wide acceptance being enjoyed by its candidate. “Edo PDP became non-existent when Ize-Iyamu left. So, Obaseki decided to defect to PDP to pick the remnant that Ize-Iyamu left. I can assure you that before the September 19 election, Obaseki will look back and will not find his followers.

“The people who are still making noise, who are still shouting Obaseki today, it is because they know that he has some three or four months to go and so the money there must be spent. The contracts awarded must be paid for. So, before the election, they are going to say wait a minute, we have nothing more to gain from this man; it is time to take our decision. Ize-Iyamu is also a planner. He is not looking at today, but tomorrow. So, he is building a foundation for co-existence between Muslims and Christians,” he said.

But the chairman of PDP in Edo State, Hon. Tony Aziegbemi, is certain that with Obaseki as its candidate, the party is back to winning ways in the state. “We as PDP family are very excited the state government has joined us with all his commissioners, House of Assembly members, and council chairmen.  So, with this, it is very clear even to the blind that comes September 19, Edo State will be fully a PDP State. Governor Obaseki has managed the affairs of the State in a particularly acceptable manner by shaping and sharpening it politically, economically, and socially to meet the standards set by the society,” he claimed.

One major factor many pundits aren’t ready to ignore in the race is the support of Oshiomhole for Ize-Iyamu. This is considering both the roles he played in 2016 towards making Obaseki governor as well as his obvious input into the process that denied the governor the APC ticket. To a lot of observers, the former APC National Chairman still possesses the political weight to tilt the contest in the direction he desires. “It will be unwise to ignore Oshiomhole as a factor in the unfolding contest. Whatever anybody may say, he is a huge factor,” Idemudia said.

But Special Adviser to Obaseki, Crusoe Osagie, said both Oshiomhole and Ize-Iyamu will face defeat at the poll, come September 19. According to him “Governor Obaseki has unwavering faith in his works and the growing support of millions of Edo people, who are the actual voters that will re-elect Obaseki. Ize-Iyamu knows beyond a doubt that his political career will be terminated unceremoniously on September 19 by Obaseki and nobody can save him. Edo people have come to the full understanding of Obaseki’s brand of politics,” he boasted.

However, Simon Ebegbulem, Commissioner for Special Projects in Imo State, who served as the spokesman to Oshiomhole before his current assignment, said “I am glad it is Comrade Oshiomhole that is once again leading the party in the state ahead of the governorship election. Even in the heydays of the PDP, he won the 192 wards in the 18 LGAs of the state; which had never happened before. Aside from his popularity, he built infrastructure; schools, hospitals, markets, roads, name it. He worked with the good; the bad and the ugly to get results. That was how he achieved success and solidified the APC in Edo State.